Have you watched The Red Shirt Diaries? For the unfamiliar, it's a brilliant series of Star Trek parody shorts, presented as logs from Ensign Williams of the USS Enterprise's security department. Each episode takes place around a TOS episode, with the first season making up the first ten episodes of The Original Series. Check them out: 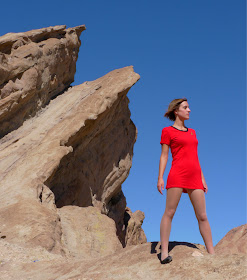 But that's just the start. The creators are busy planning season two, which will continue with parallel episodes to the rest of the TOS season one episodes. Aiming to step up their game, they hope to build a more screen accurate set for Ensign Williams, to film on location at Vasquez Rocks, and on a TOS bridge set at Starbase Studios. To help fund those more ambitious plans, they have an Indiegogo campaign, which ends today! They have actually funded all their stretch goals already, but I'm sure they wouldn't mind raising more to go further!

And you should also check out their website, for more information about the series, and to read The Red Shirt Diaries comic.