The latest expansion for Star Trek Online has been launched. Delta Rising takes us back to the Delta Quadrant, with lots of familiar faces, and follow-ups to the events of Voyager. STO have even made a homage to the Voyager title sequence to open the new adventures:

Tim Russ has returned to STO, to voice Admiral Tuvok again, and this time many other Voyager cast members are back too: Jeri Ryan (Seven of Nine), Robert Picardo (The Doctor), Garrett Wang (Harry Kim), and Ethan Phillips (Neelix). They are set to reintroduce players to numerous Delta Quadrant species, as seen in Voyager, with the Vaadwaur set up as the major enemies, and being given a cool steam-punk makeover.

Continue after the jump for a look at some of the new features and ships which have been introduced in this update:

First up, check out the producer trailer, which guides us through some the highlights of Delta Rising:

One of the features being introduced in Delta Rising is a new emphasis on intelligence, with new intelligence officer being available to your crew, and a new breed of intelligence starship, which features a special seat for said officers to work from.

Both the new officers uniforms, and the specialist intelligence starships feature dark designs, to imply stealth, and colourful glowing edges, which, look cool! You can find out more about the officers' abilities in one of STO's blogs, and more about the design process behind the new ships, in another.

The blade-like new intelligence ship designs look like they could have been the work of nuTrek's Section 31. The Federation ones do at least, as the Klingons and Romulans also have them; though the design aesthetic is pretty consistent across the factions. Those ships are: 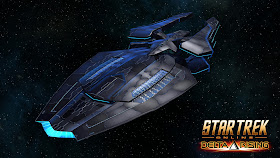 
A Tier 6 cruiser, the Eclipse is a light and nimble ship for its class, taking some inspiration from battle cruisers. It is equipped with a Cloaking Device and Active Sensor Arrays that allow it to gather information about a target to expose a vulnerability. The Eclipse Intel Cruiser is also equipped with a Structural Integrity Field universal console. This device drains the structural integrity fields of enemy starships and overloads its own. The effect not only causes significant hull damage to affected foes, it also provides the Eclipse with additional hull strength. 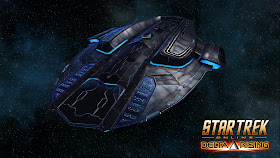 
This Tier 6 light escort was designed for stealth, speed and delivering withering volleys of weapons fire on an unsuspecting target. It is equipped with a Cloaking Device and Active Sensor Arrays that allow it to gather information about a target to expose a vulnerability. The Phantom Intel Escort is also equipped with a Heavy Phaser Lance universal console. This weapon is capable of delivering a blast of directed energy at a target that bypasses a portion of the target's shields. If used on a target that has been exposed by the Phantom's Active Sensor Arrays, the Heavy Phaser Lance deals significantly more damage and completely bypasses the target's shields. 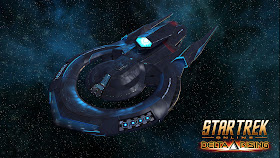 
The Scryer is a Tier 6 starship designed to complete dangerous deep space espionage missions without being detected by the enemy. It is equipped with a Cloaking Device and Active Sensor Arrays that allow it to gather information about a target to expose a vulnerability. The Scryer Intel Science Vessel also comes equipped with a Sensor Probe Swarm universal console that can deploy dozens of small probes intended to harass enemy starships. Vessels that are affected by these probes will have their shields weakened and their damage significantly reduced. In addition, cloaked foes affected by the Sensor Probe Swarm will be revealed. 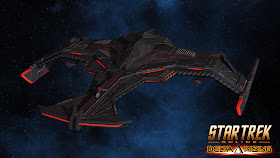 
The Tier 6 Qib Intel Battlecruiser is a stealthy and agile vessel. It is lighter than most KDF battlecruisers, but features a Battle Cloaking Device and Active Sensor Arrays that allow it to gather information about a target to expose a vulnerability. The Qib Intel Battlecruiser also features a Weapon System Siphon universal console. This device drains the weapon systems of nearby enemy starships and overloads its own. The effect reduces the damage and accuracy of affected foes and boosts the Qib's damage and accuracy. 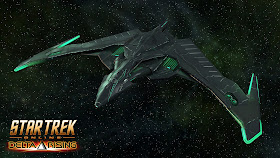 
This Tier 6 ship is the pinnacle of Romulan engineering in terms of stealth and maneuverability. It is equipped with a Romulan Enhanced Battle Cloaking Device and Active Sensor Arrays that allow it to gather information about a target to expose a vulnerability. The Faeht Intel Warbird also features a Heavy Plasma Lance universal console. This weapon has two modes. The first fires a single, heavy plasma beam at its target, causing a fierce plasma fire and rendering the target vulnerable to Intel Expose Vulnerability abilities. However, if the opponent is already in a vulnerable state, the Heavy Plasma Lance bypasses the target's shields and does even more damage. 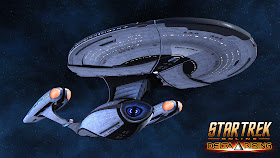 
A versatile Tier 6 starship capable of accomplishing almost any class of mission, the Guardian features a Particle Conversion Matrix universal console. It can use this device to absorb incoming energy damage through its shields, significantly reducing incoming damage. With the Particle Conversion Matrix, the Guardian Cruiser also gains a modest amount of bonus energy weapon damage each time it is struck by enemy fire. 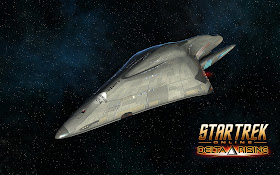 
The original Dauntless class science vessel was discovered by the crew of the U.S.S. Voyager in the Delta Quadrant in 2374. Completely alien in origin, the ship and its Quantum Slipstream Drive were created as a trap for the crew. Recently, however, specifications for the ship were discovered in the Delta Quadrant, and the Starfleet Corps of Engineers has been able to recreate this impressive starship as a Tier 6 vessel. 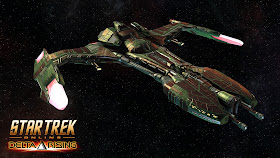 
The Mat'Ha Raptor is the most advanced tactical vessel in the KDF fleet. This Tier 6 starship is designed to have unparalleled forward firepower capable of delivering volleys of devastating torpedo fire at its enemies. It is equipped with a Cloaking Device. The Mat'Ha also comes equipped with a Heavy Disruptor Nose Cannon universal console. This console can unleash a sustained barrage of disruptor fire to any starship that enters its range of fire. Enemy ships hit by this weapon will have their engines knocked offline for a short time. 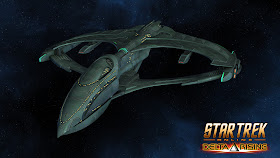 
The Aelahl Light Warbird Battlecruiser is a Tier 6 ship created by the Romulan Republic to fill a need for a more agile battlecruiser. The Aelahl is less durable than the D'deridex, but significantly more maneuverable. It comes equipped with a Battle Cloaking Device. The Aelahl Light Warbird Battlecruiser also features a Destabilized Singularity Projector universal console. This device allows the Aelhal to project a collapsing singularity toward a distant group of foes. The intense stress on the enemy ships' hulls causes heavy damage and dramatically reduces their damage resistance to exotic damage.

As ever they do, STO have also introduced a new lock box, allowing players to win a variety of Delta Quadrant themed equipment, personnel, and ships. The top prize is a Benthan assault cruiser, while other ships up for grabs are the Hazari destroyer, and  Kazon heavy raider. 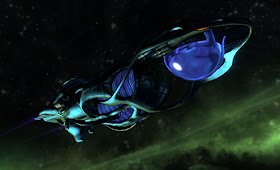 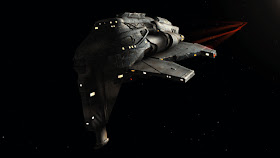 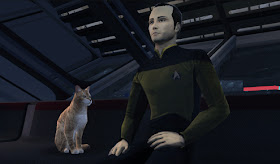 For full details of what can be obtained via the lock box, check out another of STO's blogs, and a separate article details the ship specs. I will highlight one other potential prize: You can get a cat! With the option of no less than nine different breeds!