Diamond Select Toys' fourth Star Trek Select action figure, Worf, who was recently previewed at the New York Comic Con, is now available for pre-order on Entertainment Earth, who anticipate he will be arriving in April. The description of the figure states that it "includes a diorama base compatible with the previous Star Trek Select release", although what is shown in the new image is a rather different base design than the Borg decking included with Picard, with a large wall with a Klingon emblem on. Worf will also features several different arms and weapons to allow different action poses, and even two different hair styles! 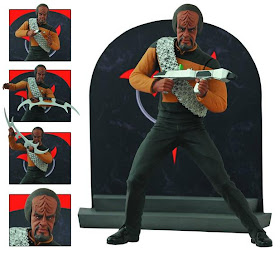 Entertainment Earth have also recently added listing for more bobble-heads from Bif Bang Pow, continue after the jump for a look at those:

Earlier in the year Bif Bang Pow launched their Wrath of Khan bobble head collection with the release of Kirk, Spock, and Khan. Later listings appeared for Scotty, Sulu, and Chekov, which are expected in November, and now finally Uhura and Doctor McCoy are also on offer, and will be joining their crewmates n the November releases. Here's a look at those final additions to the collection: 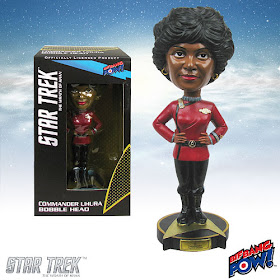 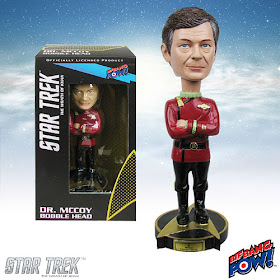