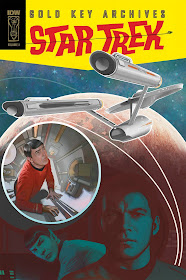 Boldly going... where it all started! Presenting the first comic book adventures of the U.S.S. Enterprise and her crew! Fully remastered with new colors, Volume 3 collects issues #13-18, including stories such as "Dark Traveler," "The Enterprise Mutiny," "The Hijacked Planet," and more.

Pre-order: Amazon.com, Amazon.co.uk, Amazon.ca, Amazon.fr, Amazon.es.
We can expect the "and more" to be Museum at the End of Time, Day of the Inquisitors, and The Cosmic Cavemen - Remastered to the same quality as the previous two books, this will be a real treat. (See previous reports for previews of book one, and book two.).

Speaking of early classic comics: While Gold Key were publishing in the US in the sixties and seventies, there was also a string of comic strips printed in magazines in the UK. These rarely seen comics are little known, and had some truly stunning artwork - It was hoped that following IDW's publishing of the US newspaper comic strips over the last couple of years, they would continue the series with a couple of books collecting the UK strips.

Alas these books have yet to surface, and according to a recent blog by Star Trek comic collector Rich Handley (who worked on the newspaper strip reprint books) it seems IDW might not be going ahead. Rich has called for a campaign to alert IDW of the demand for these, including encouraging fans to write to IDW to let them know. I echo Rich's request; these amazing and rare comics deserve to be seen by a wider audience. Come on IDW, make it happen! I've posted a few sample panels from the UK comics on my tumblr, check them out, beautiful stuff.

Continue after the jump for more comics news, including a possible Gary Seven photo-comic, the latest previews from City on the Edge of Forever, and some details on the Planet of the Apes crossover.

As regular readers will know, John Byrne is currently working on an ongoing bimonthly TOS photo-comic series, New Visions. Byrne has often found ways to weave his Star Trek comics together, and has already managed to feature Number One (the star of his series Crew) into a cameo, with promises of some Pike-era flash-backs to come too. Now it seems Byrne is also eyeing up a tie-in to his Assignment: Earth comics, with the possibility of Gary Seven turning up in New Visions. He posted this could-be-first-page of a potential Gary Seven story on his forums: 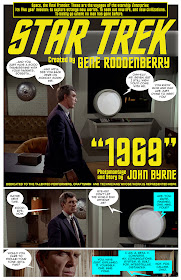 As Byrne's commentary for this page notes, this is at present just an experiment (fingers crossed it grows into a full issue):


Last night my brain got buzzing about a possible appearance by Gary Seven in a future issue. Of course, the biggest problem there is not being able to use Teri Garr's likeness. Unlike the drawn version of ASSIGNMENT: EARTH, I can't simply "recast" Roberta Lincoln. But I have mentioned before a solution I was considering, if I ever got around to this tale. So I decided to go ahead and do the title page, just to see how it flowed, even if this particular version doesn't end up being used. 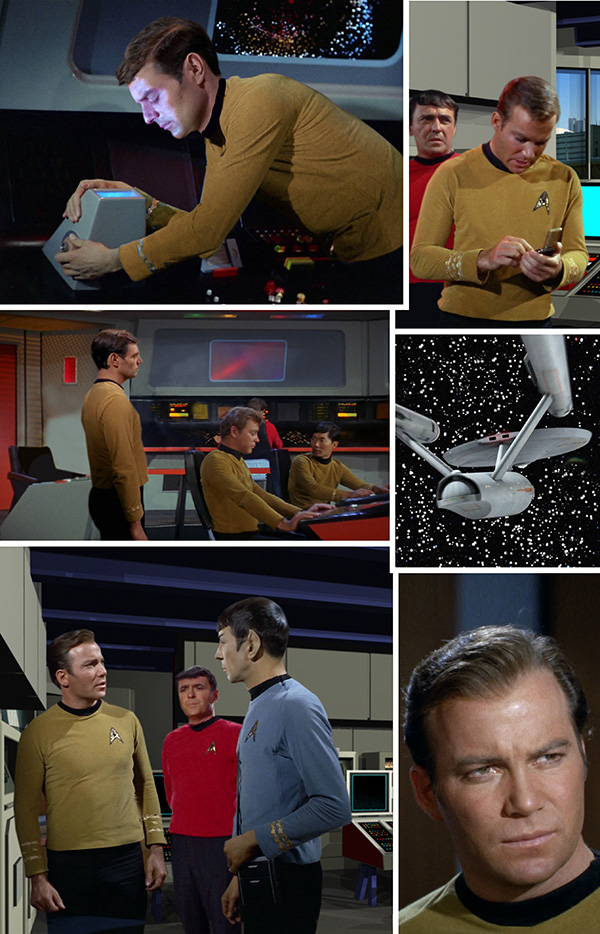 Byrne regularly posts previews and work-in progress on his forums, and with another recent full page preview he noted the processes that go into making these photo-comics:


I think I mention somewhere upthread that some pages just fly together, because I am able to use whole images for the panels. But more and more, as I get more "adventurous," panels and pages require a lot of construction. Especially when I use CG models for backgrounds. A page like that can take a day, sometimes more.

Here's a page from the current issue that illustrates, somewhat, the process.

Panel One: a "head transplant" so Lt. Hansen can take over for Mr. Spock at the science station. Lighting added to Hansen's face, and also the part in his hair, since the head was flopped. Body is Spock, so tunic color changed and sleeve braid altered.

Panel Five: CG background, Kirk and Spock from the same shot, Scotty from another.

Realized after posting that Spock's braid needs modification, given the vintage of this story.

Meanwhile, from another new vision of TOS, IDW editor Chris Ryall recently posted (on Tumblr) a few pages of J.K. Woodward's art from the comic book adaptation of Harlan Ellison's original teleplay for City on the Edge of Forever. These dream-like pages featuring Kirk and Spock are from this week's penultimate issue in the series (look at for a full preview here, later today): 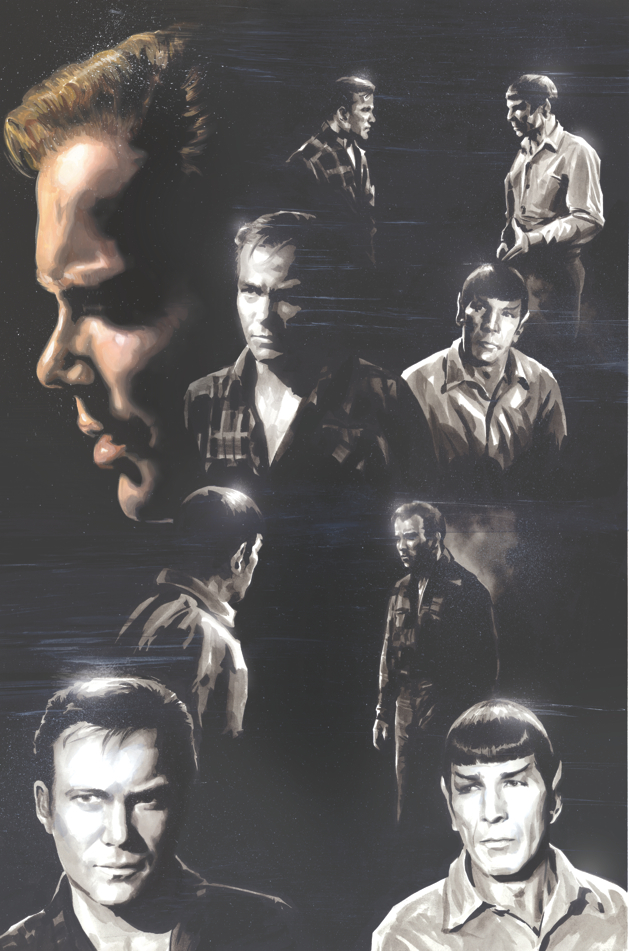 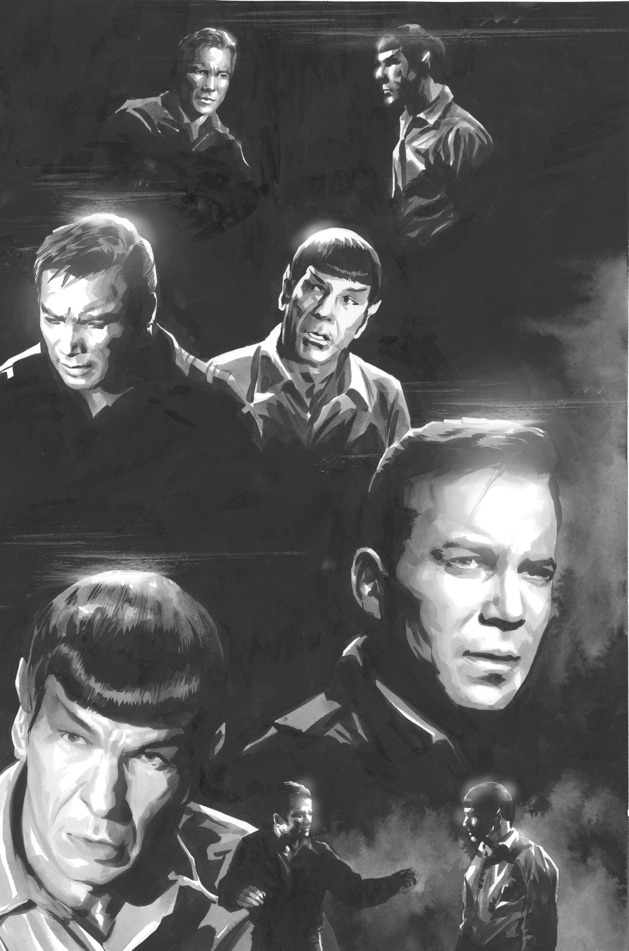 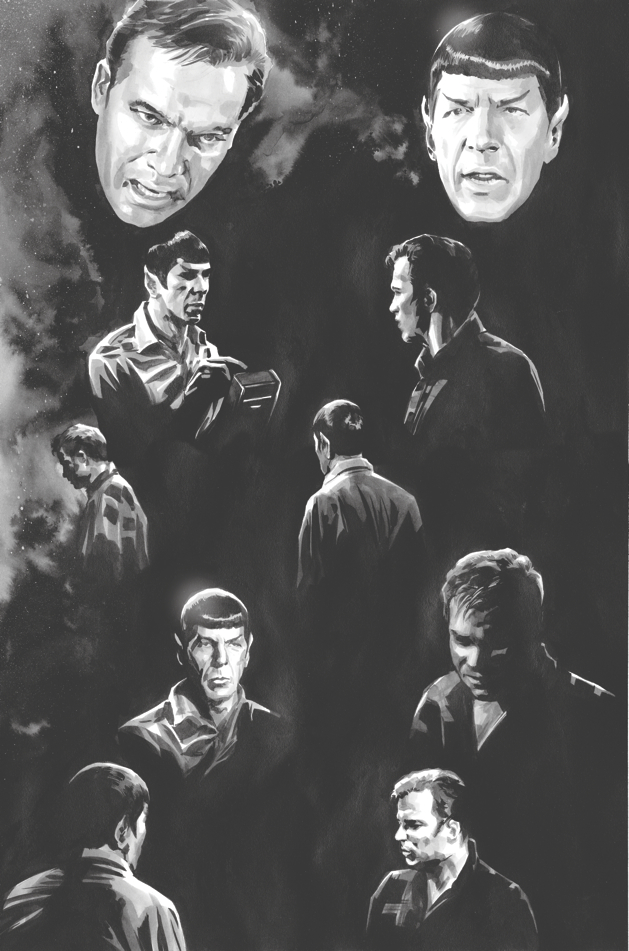 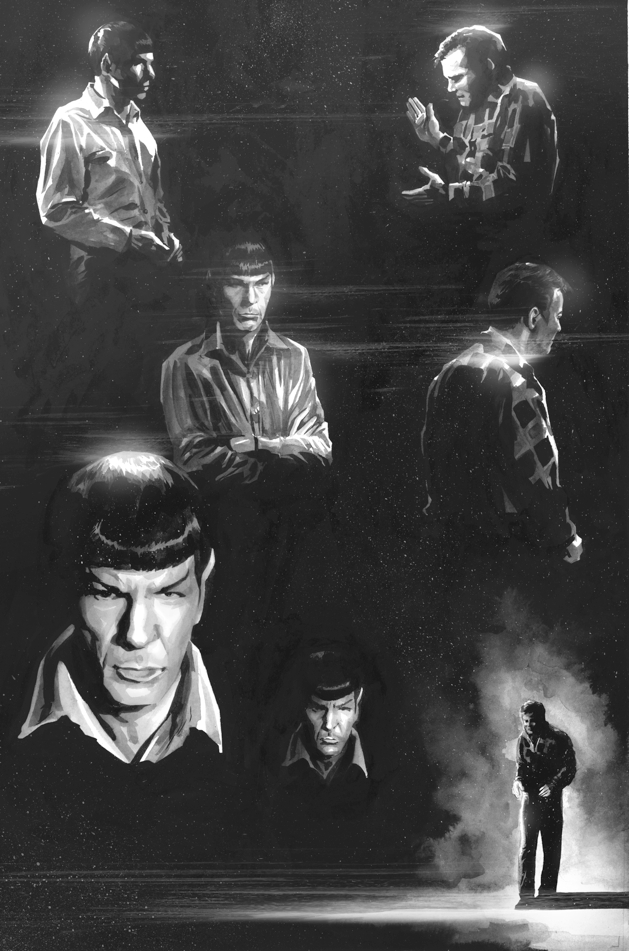 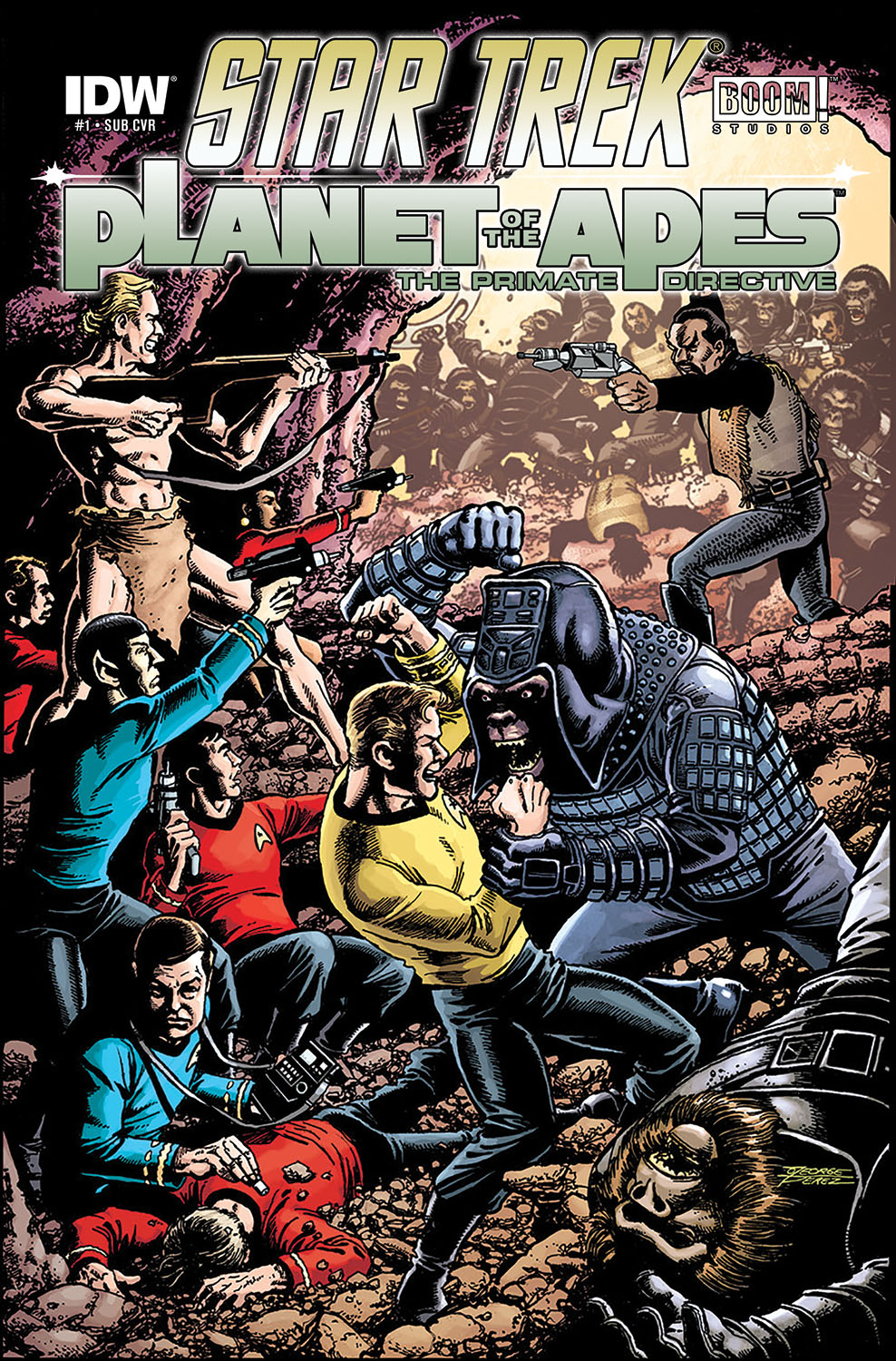 Finally, a little bit of information on the TOS/Planet of the Apes crossover, which starts in December. Comic Book Resources posted an interview with the series' writers, Scott and David Tipton, and artist, Rachael Stott. They were of course pretty tight-lipped about details, but David Tipton did reveal something about the setting of the story:

Scott Tipton also made note of how the realities interact:


Without giving away too much of the plot, we will say that it was important to us that we play by all the rules of both universes, and come up with a way to bring these characters together that honored both properties' canon.

As with so many great "Star Trek" tales, Captain Kirk and the Enterprise crew find themselves caught up in Klingon skullduggery, and in trying to find out exactly what they're up to, wind up someplace they never expected: Earth. But is it their Earth?

You can read more from all three creators over at Comic Book Resources.You might also want to check out IDW's December solicitations, which revealed four of the six covers for the first issue in the series!

For details of all this years comics, and links to previous coverage, hit the "comics" button on the schedule page.