Interview: Rob Caswell on the art of Seekers

Out now are the first two books in the new novel series, Seekers. The books are written by the same team that brought us Vanguard (and indeed it follows on from that series), with novels alternating between David Mack, and Dayton Ward and Kevin Dilmore. But now there's another member of the creative team, Rob Caswell, the artist that inspired the series with his brilliant fan art book cover designs, and is now creating real covers for the published books. Rob spoke to me about his work on the new series (interview continues after the jump): 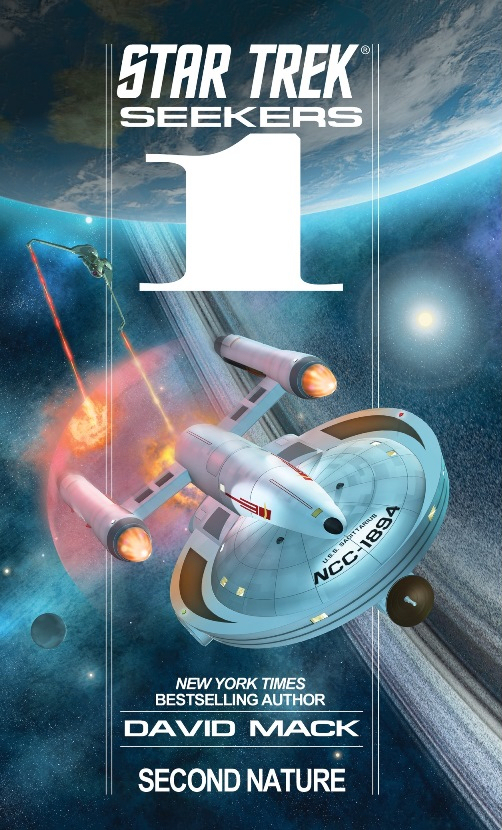 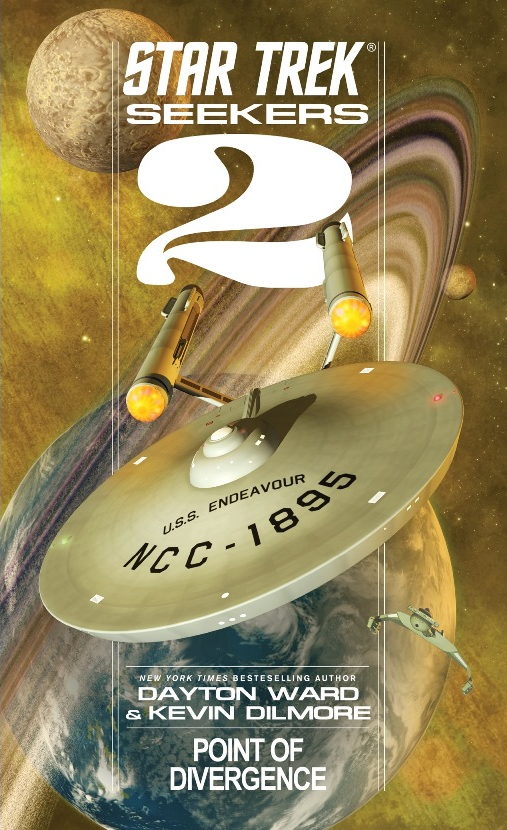 So Rob, you inspired an original Star Trek book series, that's quite something! For those not familiar, can you remind us how you got from Blish-book homages to the books on our shelves today?


I guess the condensed version of the story goes like this. As a personal project I decided to create new book covers for all twelve of the original James Blish “novelizations”, updating the imagery with details of what we were then seeing in the “remastered” version of TOS, which was airing at the time. I had so much fun with that I wanted to do more, so I created a fictional Star Trek spin off TV series – The Seekers – and popped out about five well-weathered covers, posting the results on my Deviant Art site.

Years passed and I was unaware that, behind the scenes, the writing team who handled the monumental “Vanguard” TOS novel series was looking for some new direction to take their work. They ran across my Seekers treatments and got excited with the idea of making this series idea become real, using me as the cover artist and keeping my ‘70’s Blish cover graphics treatments. To “Trekkies of a certain age” those big, bold book numbers below the Star Trek name hits a nostalgic sweet spot.

So that’s how I got pulled in – ye olde cycle of inspiration. It’s a testament to how the internet has changed our creative pursuits. Twenty years ago I may have done these images and just stuck ‘em in a drawer where no one else would ever see them. The internet offers all kinds of new ways for creative people to share their work and inspire one another.

Two of Rob's covers for the imagined series, The Seekers: 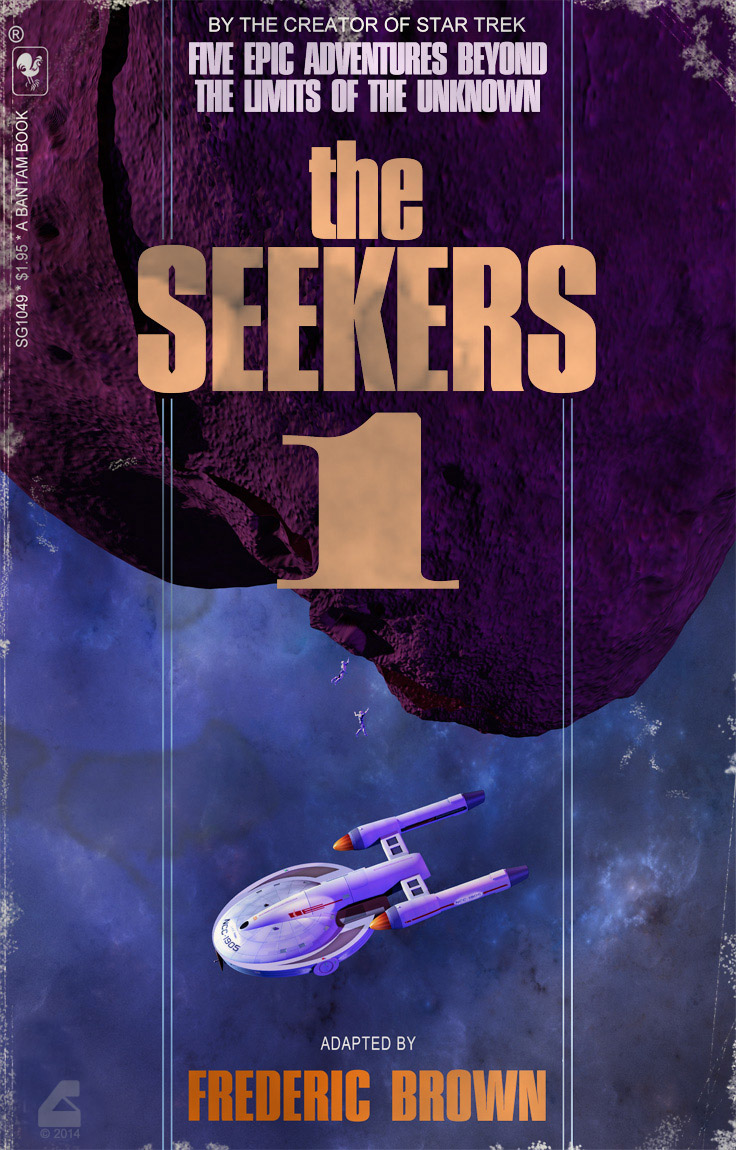 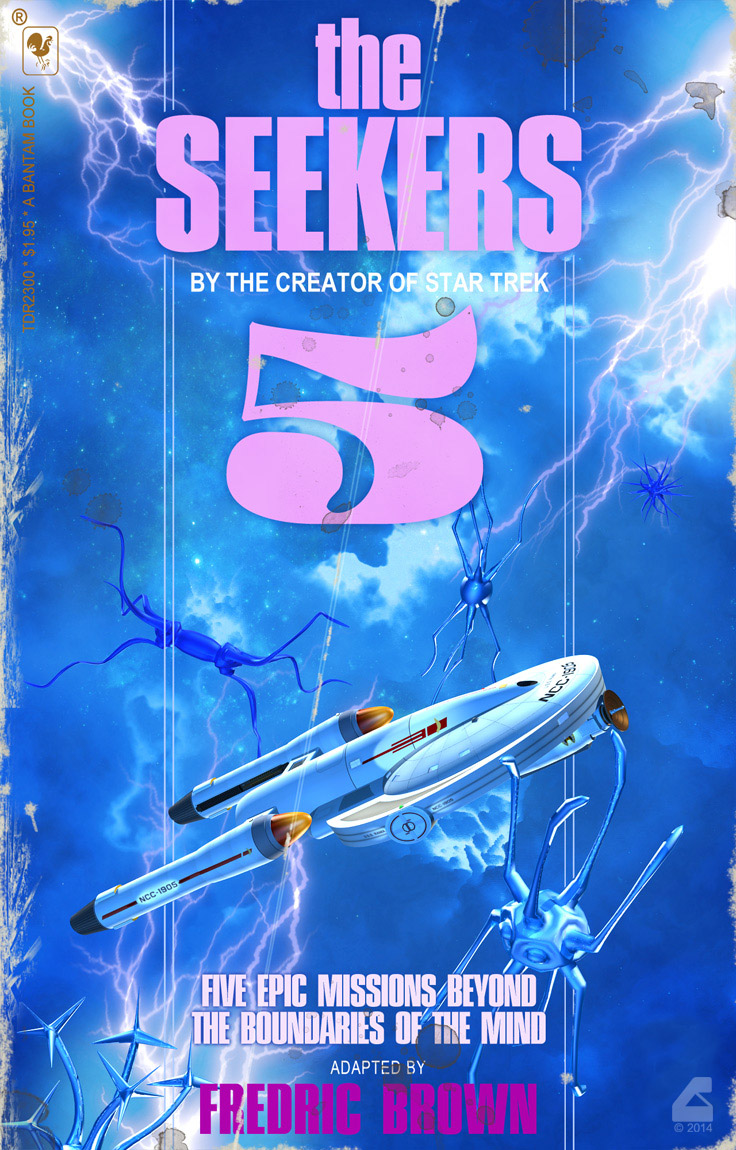 This isn't your first published Star Trek work though, is it?


I started my illustration career in the 80’s doing pieces for many of the popular printed scifi role-playing games of the time, like Traveller, TORG, the Star Wars RPG, and others. In 1988 I was pulled in as one of the primary illustrators for FASA’s “Star Trek TNG Officer’s Manual” which was really the first licensed “tech manual” for the series. It’s long out of print now, but I think it’s still got a space on bookshelves from the period’s TNG fans.

But the Seekers covers – the one’s that inspired the book series – that was just done for my own fun so it was a pure fannish indulgence that just happened to lead to something wonderful. In my day job I’m a fine art printer and I’m always telling hopeful clients that “getting discovered” is an unrealistic fantasy scenario. Now, thanks to the Vanguard guys, I’m a hypocrite.

I imagine there must be some differences creating covers for publication rather than purely for fun, has there been any change in your processes when approaching the Seekers covers?


Well there’s certainly more time and care that go into a work for publication. I liken much of the work in my Deviant Art gallery to “sketchbook doodles”. They may feel more polished than that, but it’s really about the same time investment.

Working up a similar piece for publication requires more care in postwork, fleshing out fine details via digital painting, and spending more time evaluating color, contrast, and the like. These days it’s also key to make sure the piece will still grab the eye as a thumbnail, given the volume of online sales.

Perhaps most significantly I had to add the step of creating a cover concept, making sure it meets the criteria of the writing team and the publisher. With books one and two I did about five or six concept roughs each for us to look at. I probably wouldn’t usually offer up that many on a first pass, but our cover specification left a lot of creative freedom in how to compose the elements, so it was good to explore the options.

So with the original “fan covers”, it was about a night’s work for each. Doing the two “pro covers” was about a two month long process, but there’s a lot of stop and start there… and a couple of weeks waiting for approvals.

The covers feature Masao Okazaki's design for the Archer class, and of course Matt Jefferies' Constitution class. I believe there are more artists helping bring your covers to life though?


Credit where credit’s due, I’m standing on the shoulders of some modeling giants from around the globe. The Endeavor model is the creation of Georg Angelakis (aka “Aggi”), the Sagittarius is the work of Mark Azevedo, with some additional tweaks by my buddy Geoff Edwards (aka “Ptrope”). The super nifty Klingon Bird of Prey is by Fabio Passaro, and last but not least the D-7 is the work of the prolific and talented David Metlesits.

My own modeling skills are more than rusty (I haven’t done any real 3D modeling in over 15 years), so that’s something I need to attend to in the future. But also why reinvent the wheel? I chose these models because they’re what I need and what I’d make myself (if I had the skills), so it made more sense to contact these guys and offer to arrange for a production license for their models in my work. My hat’s off to these guys and their refined talent! 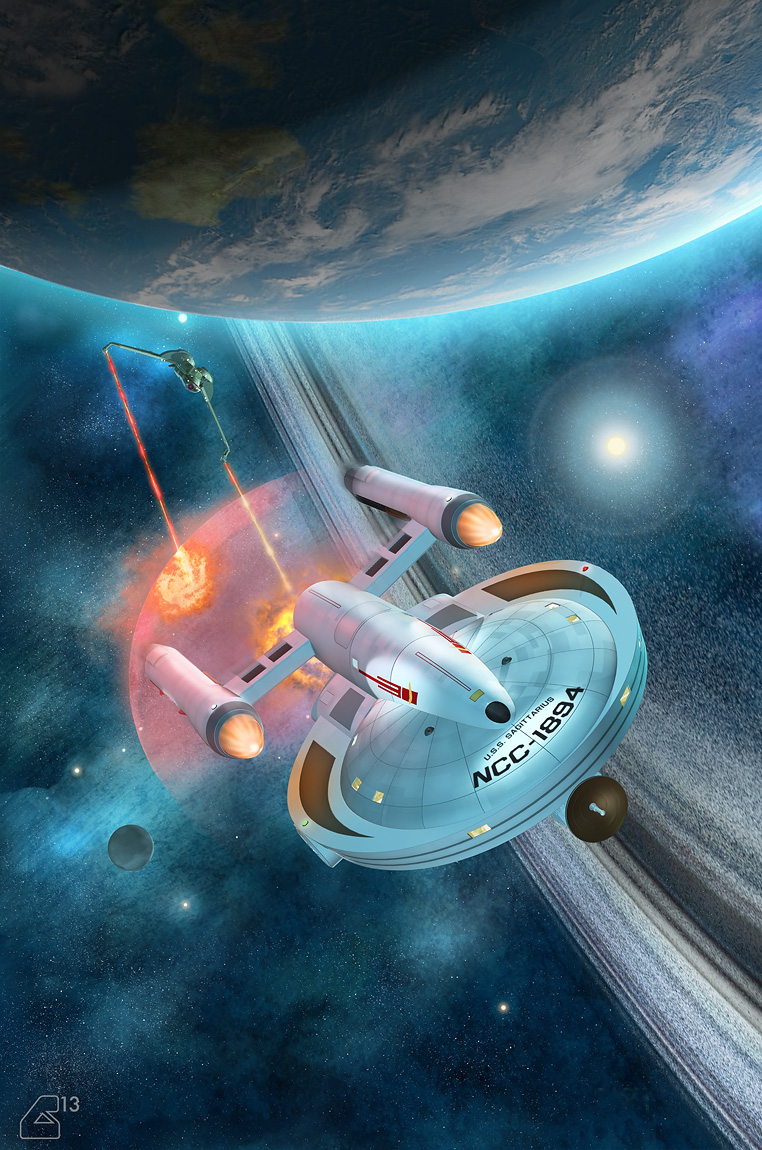 We've seen your covers for both Seekers books, and some of the concepts that lead to each of the final designs. Could you take us through how you settled on the final form for each book? Starting with David Mack's Seekers 1: Second Nature.


The cover concept was pretty basic: the Sagittarius in orbit around a ringed terrestrial planet with a moon and engaged in an aggressive encounter with a Klingon Bird of Prey. When you look at the various roughs in a line up, it’s pretty obvious that we mixed and matched a few elements from three of the designs: the planet from one, ships from another, and the weapons fire from a third. So it was just a process of review and discussion about the elements that we liked. 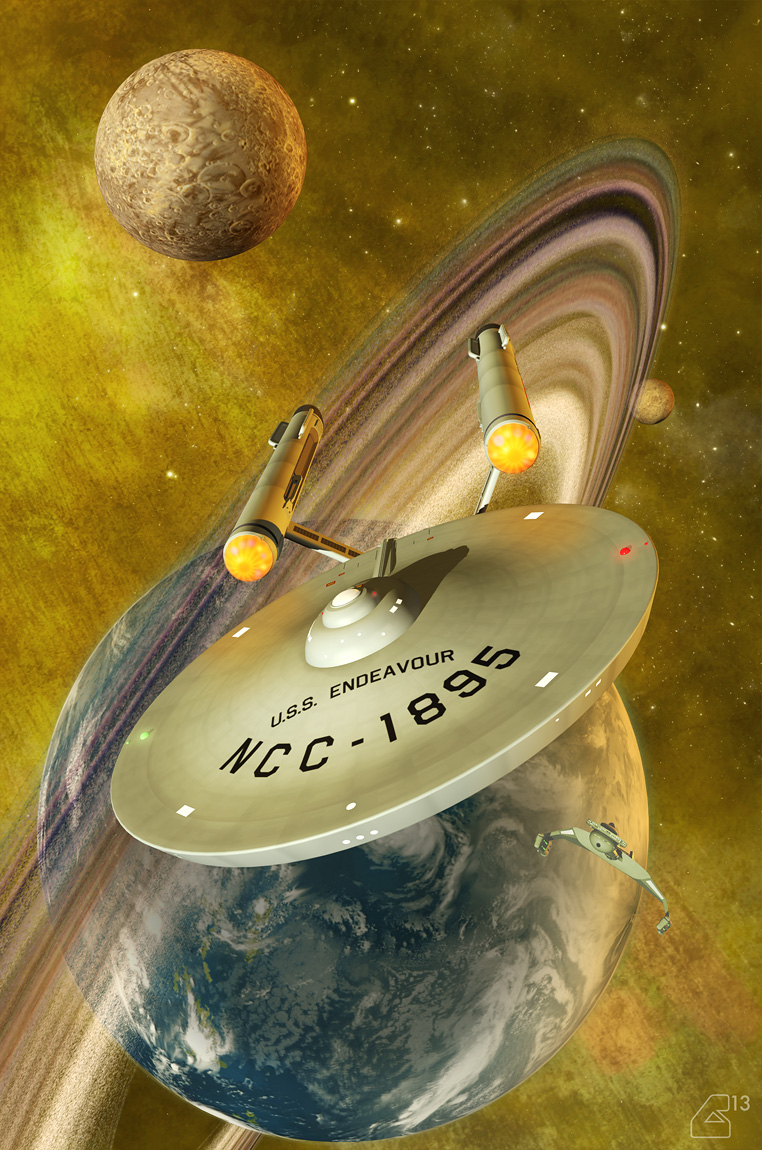 And for Seekers 2: Point of Divergence, a different ship, and two authors, Dayton Ward and Kevin Dilmore.


For both covers we wanted the illustrations to be visual introductions to the series’ vehicular heroes. As such we knew that we wanted the registry to be visible for each cover… a sort of “Hi, My Name Is…” badge for each.

The cover for “Point of Divergence” was a sort of beefed up version of “Second Nature”. Both ships jump to a larger vessel class, so we get a Constitution class versus a Klingon D-7, but the background setting is the same. And we used the same process to refine our final choice: a discussion of what elements we thought worked best.

These first two books form a two-part story, but the series as a whole in intended to be a series of stand-alones. There is some sort of symmetry in the designs of the first two books, with the starring ship pursued by a Klingons on each. What was the thought process when tackling these two books in consideration to them being a duology?


Well side from the shared theme of “Federation vs. Klingon in orbit”, there wasn’t much more of a master plan. So if you butt the two covers together you won’t get an “ah-ha” moment. Part of that individuality is to encourage the idea that this series is largely going to be stand alone stories, even if we did kick it off with a two-parter. 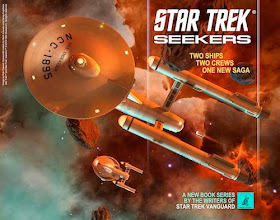 There's a third piece of art in the Seekers series already, the promotional poster print. What was your brief there?


The main criteria on that piece was to do an image that showed both ships together, delivering the idea of relative ship size and the two ships as a sort of “team”. Aside from that, the goal was to try and create something that would snag Shore Leave attendees’ retinas and make them say “OOoooo!” I can’t say how well I hit that mark, but the poster seemed pretty well received. I think David Mack still has a few left and will be offering them at the New York Comicon in early October. 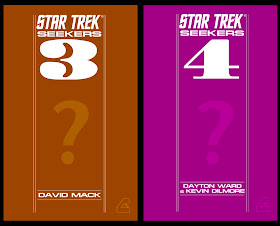 There has been much anticipation for this series, so much that books three and four have already been commissioned. Do you have a vision for the future covers to go with the unfolding series?


Yeah, it’s great that books three and four got the green light before we even hit shelves! I’ll be starting book three’s cover next month and probably book four’s shortly thereafter. We have an idea for the book three cover, but that’s all I can say on the subject for now.

As far as my personal goals with the coming covers, I want to see if I can push the painterly aspect of the images even more with the goal of capturing the wonderful feel of Lou Feck’s original Blish covers. It’s an interesting challenge trying to make crisp digital media look more like a hand made product. So I’ll be pushing both my digital painting and my fledgling modeling skills further, I hope. Of course the bottom line is always to just try and create some great Trek art – the kind of thing that people enjoy looking at again and again as they work their way through the book.

And finally, what else have you ahead? Will you be entering some Seekers art into the Ships of the Line competition? Or anything on the horizon, Trek or otherwise, that we should be looking out for?


I’m not going to be doing anything for that Ships of the Line contest as I’m too booked up with other freelance work at the moment. I’m in the middle of an e-book cover for Allen Steele’s Kindle version of his novella “Escape from Earth”. After I finish Seekers 2 and 3 I may be starting some interior work for a book that Allen is currently in negotiations to sell. Beyond that the picture’s fuzzy, but my schedule has a way of filling up and it always seems like I have some personal projects warming on the back burner.

Big thanks to Rob for taking us through the creation of the Seekers covers, and congratulations too for inspiring the series in the first place! You can see lots more of Rob's work in his DeviantART gallery, including all those great Blish and The Seekers covers.

You can also hear and see more from Rob in my previous features, on the Blish series, and The Seekers series. Plus check out my 8of5 Archive article on the original Blish covers, where all this began.

The first two Seekers books, Second Nature by David Mack, and Point of Divergence by Dayton Ward and Kevin Dilmore, are both available now.