There seem to be Star Trek fan films popping up left, right, and center of late, but some really stand out from the crowd, and Axanar is one of those. If you have somehow missed all the hype about this impressive production, Axanar sets out to tell the story of Garth of Izar in the Four Years War. As the Axanar Kickstarter page describes:


Axanar takes place 21 years before the events of “Where no Man Has Gone Before”. It tells the story of Garth of Izar, the legendary Starfleet captain who is Captain Kirk’s hero and the role model for a generation of Starfleet officers. Garth charted more planets than any other Captain and was the hero of the Battle of Axanar. His exploits are required reading at Starfleet Academy.

This is the story of Garth and his crew during the Four Years War, the war with the Klingon Empire that almost tore the Federation apart, and whose resolution solidified the Federation and allowed it to become the entity we know in Kirk's time.

It is the year 2245, four years into the war with the Klingons.

The Axanar team are looking to fund a feature film to tell this story, and incredibly have already raised almost $600,000 in their Kickstarter campaign, which closes in just a few hours - At the close of the Kickstarter campaign, they had got up to $638,471! This was to be the first of several Kickstarters to get them to their full budget of $750,000, but they have smashed their initial $100,000 goal for this first effort. And quite right too, what they have already shown is amazing work.

Released a few weeks ago was Prelude to Axanar, a twenty-minute film setting up the Four Years War, in the style of a history documentary.  This on its own is an amazing piece of work, and a completely original approach to Star Trek. If you've not seen yet (or even if you have), check it out:

There's some beautiful design work too, the featured ship, the USS Ares, was designed by Sean Tourangeau (designer of the USS Titan), and the effects work is being done by Tobias Richter. Continue after the jump for a look at some of the ship designs to be featured, many are prime universe interpretations of nuTrek designs: 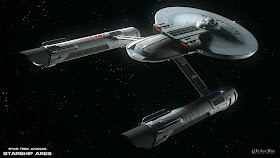 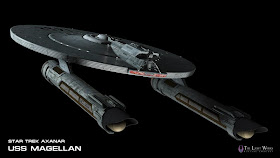 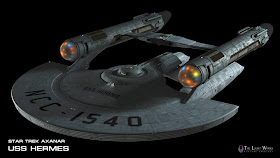 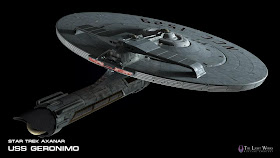 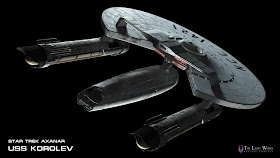 You'll find more images of these and other ships, in the galleries on the Axanar Facebook page. Don't forget to drop by the Kickstarter page too to add your support.