Due in September from Funko will be a new series of Mystery Mini figurines. While most of Funko's Mystery Mini series focus on a single property, this time they've gone for a theme, "classic sci-fi", with characters plucked from cinema classics like Forbidden Planet through to modern marvels such as Firefly. Representing Star Trek in the mix will be Spock, armed with his lirpa (presumably to fend off Aliens, Predators, and other dangerous beings in this assortment). 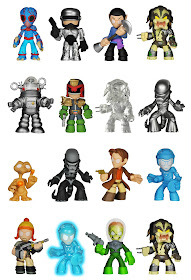