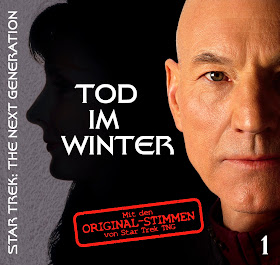 Here's some very exciting news for German audiobook fans. A new Star Trek publisher, Highscore Music, has announced it will very soon be releasing a full cast audio adaptation of the first TNG relaunch novel; Michael Jan Friedman's Death in Winter, aka Tod Im Winter. And when I say full cast it's no exaggeration, on their Facebook page they list over forty actors involved, with almost every character in the book getting a unique voice! Those actors include the German dub voices of all the main TNG characters in the book too!

The book is being split into eight episodes, which will be available to download from Amazon.de and iTunes from the end of the month. There don't appear to be plans to release as a CD, nor details of other titles to come, yet. Thanks to Jens Deffner (of UnrealitySF) and Christian Freitag for sending news of this my way. 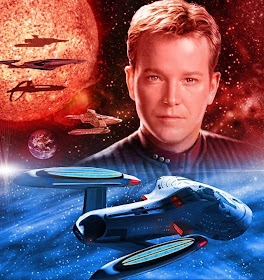 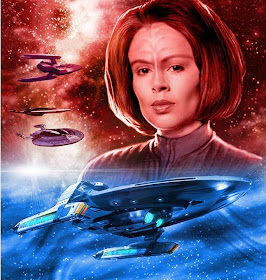 These square designs will most likely sit above a title block for the final covers (following the precedent of the other Voyager books from Cross Cult). Featured on the covers, along with Tom and B'Elanna, are Cross Cult's rendition of the refit USS Voyager, and Mark Rademaker's USS Planck (from the 2012 Ships of the Line calendar). While the rest of Rademaker's fleet designs appear less prominently in little stacks of ships on either cover. These books are due in October this year and March 2015.

Continue after the jump for more Cross Cult news: 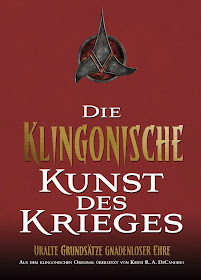 The German edition of Keith R.A. DeCandido's new Klingon book, The Klingon Art of War, is due out in German in November. To the right is their cover for, Die Klingonische Kunst des Krieges, which is pretty much the same as the US version, just, in German.

Cross Cult have also been tweaking their schedule quite a bit lately, shifting several books back and forth a month or two. This is pretty normal for Cross Cult, as they tend to adjust things after announcing pretty far in advance.

They've also added some new titles. The Fall is now down to start in September 2015, matching the US monthly release in fact, just two years later. That takes Cross Cult into 2016 already, when they also plan to restart releases of the nuTrek Starfleet Academy series (which they paused after the first two books in 2012). Perhaps this timing is designed to make the most of the next nuTrek movie being out that year.