Books bits: Section 31, covers, and the shape of Voyager to come? 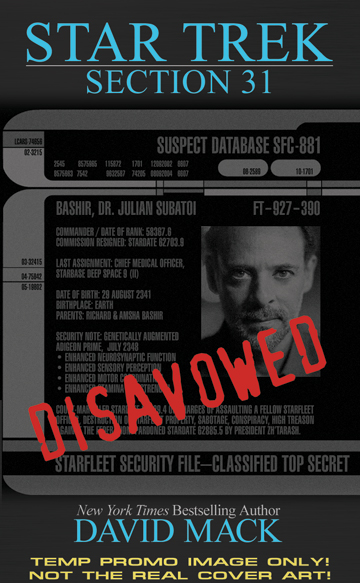 Books news! David Mack has updated his website with the blurb for his post-The Fall novel, Section 31: Disavowed, which is due out in November:


SECTION 31
NO LAW.
NO CONSCIENCE.
NO MERCY.

Amoral, shrouded in secrecy, and answerable to no one, Section 31 is the mysterious covert operations division of Starfleet, a rogue shadow group committed to safeguarding the Federation at any cost.

Doctor Julian Bashir sacrificed his career for a chance to infiltrate Section 31 and destroy it from within. Now it's asking him to help it stop the Breen from stealing a dangerous new technology from the Mirror Universe — one that could give the Breen control over the galaxy.

It's a mission Bashir can't refuse, but is it really the shot he's been waiting for? Or is it a trap from which even his genetically enhanced intellect can't escape?

Pre-order: Amazon.com, Amazon.co.uk, Amazon.ca, Amazon.de, Amazon.fr, Amazon.es, Amazon.it, Amazon.co.jp.
The cover above is just a promo image, but a couple of real covers have been recently revealed. Simon and Schuster have released the cover for Michael A Martin's TOS ebook novella, Seasons of Light and Darkness: 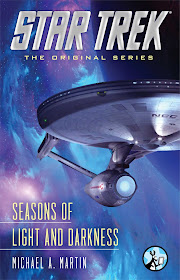 Pre-order: Amazon.com, Amazon.co.uk, Amazon.ca, Amazon.de, Amazon.fr, Amazon.es, Amazon.it, Amazon.co.jp.
There's still no blurb for this one, but previous information from the author has suggested it will be a McCoy story, set amongst events early in The Wrath of Khan. It's due out in April.

Meanwhile IDW editor Chris Ryall has posted what appears to be another cover for the forthcoming comic book adaptation of Harlan Ellison's original screenplay for The City on the Edge of Forever. The post was actually to celebrate William Shatner's birthday, and didn't detail when this artwork will be used, but it looks like one of Juan Ortiz' covers to me: 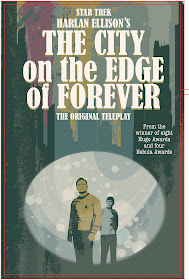 Finally, German publisher Cross Cult posted a new image too, not a whole cover, but an image of the quantum slipstream enable refit USS Voyager. As Full Circle is set for German release in October, I would speculate this might be something they are readying for use on that cover; as Mark Rademaker's refit design isn't ready for cover duty yet. 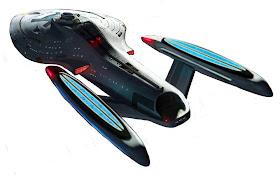