At this week's Toy Fair, Bif Bang Pow have revealed several new Star Trek items in their range. They have plans for lots of new bobble heads: Continuing the series of bobble-heads already begun with the Wrath of Khan Kirk, Spock and Khan characters, the line will be expanded to include the other main TOS characters in movie-era uniforms, plus the Klingon Kruge.

At the same scale there will also be a lone Voyager character, Seven of Nine. While at a smaller scale Bif Bang Pow are also planning a series of captains in chairs monitor mates, one for each of the prime-timeline series. 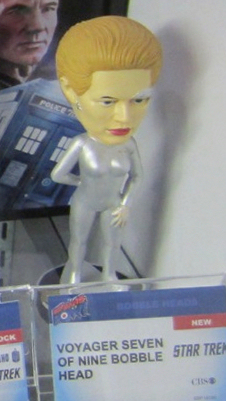 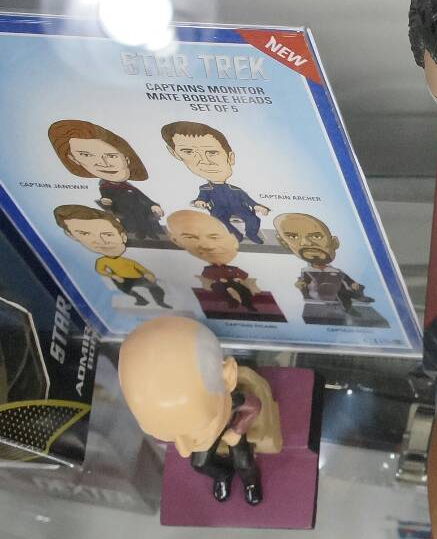 They are also planning another bobble-ship, a rather curious wooden version of the TOS USS Enterprise.

Bif Bang Pow are also planning some Star Trek action figures, as the latest release in The Big Bang Theory/Star Trek crossover range. They have previously displayed prototypes of Mego-style versions of The Big Bang boys in Starfleet uniforms at last year's Comic Con. At the Toy Fair this time they just had artwork on display, which shows the boys have been joined by the main female characters form the series too. All seven will form series two of Bif Bang Pow's The Big Bang Theory eight-inch action figure range. 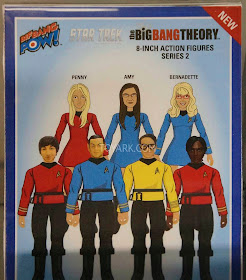 The images above come from Toy Ark and 16 Bit's coverage of the Bif Bang Pow displays. You can see many more images of these items and other Bif Bang Pow products at both sites. And if that's still not enough, Awesome Toy Blog and Kastro's Korner also have good coverage of the display.