CBS have released the first details of Enterprise Season Four, on bluray, which is due to come out April. Here's the cover: 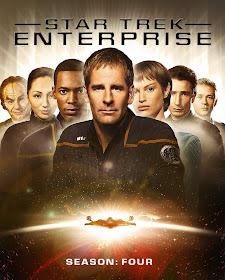 Here's what StarTrek.com had to say about the extra features included:


Among the Season Four extras: new commentaries, deleted scenes, outtakes, and a variety of featurettes. The VAM highlights will be "Before Her Time: Decommissioning Enterprise," a four-part documentary comprised of cast and crew interviews, and "In Conversation: Writing Star Trek Enterprise," a 90-minute writing staff reunion that brings together Brannon Braga, Mike Sussman, Andre Bormanis, David Goodman, Chris Black, Phyllis Strong and Judith and Garfield Reeves-Stevens.

And here's a trailer!

Brannon Braga also tweeted a photo yesterday, of him with the other Enterprise writers at the filming of the reunion piece in this set: 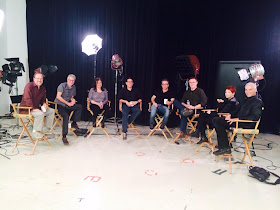