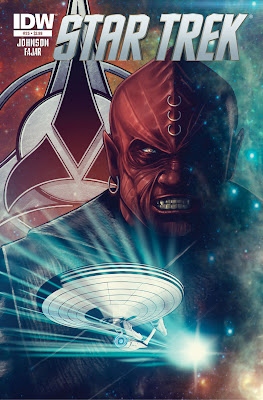 Comic Book Resources have posted a interview with the nuTrek comics writer Mike Johnson, discussing the forthcoming arcs in the ongoing series, and the Khan prequel series. Johnson gave specifics of how the next ongoing issue will be launching into the five-year-mission:


...we're on the five year mission now. It runs smack into the galactic threat of the Klingon-Romulan conflict, but after that (with the crew members that survive) we will be going into deep space. We might run into familiar faces and places out there in the stars, but for the most part it's an opportunity to tell stories that take the Enterprise to new places we haven't seen in comics, film, or TV before.

At the beginning of #25, we find the Enterprise docked at a Starbase on the edge of unexplored space, with their five year mission getting underway in the aftermath of "Star Trek Into Darkness." And we'll meet a new member of the crew with the same last name as a current iconic Enterprise bridge mainstay.

He also gave a few hints toward the future of the series, including the possible return of April, and the promise to expand upon some of the new crew members introduced in Into Darkness:


April doesn't show up in this arc because he's still stewing in a Starfleet rehabilitation facility back on Earth. But he's definitely in the mix for the future. A past captain of the Enterprise who was in league with Alex Marcus and has no love for the Klingons is just too juicy a character to leave on the bench.

I love Zahra, a redshirt who appeared in an original series episode. She plays a bigger role coming up, and we have matched the name to a background actor we saw in "Star Trek Into Darkness." We are also planning to give backstories to other new crew members we glimpsed in the last movie, like the android-looking guy on the bridge. 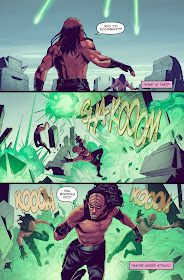 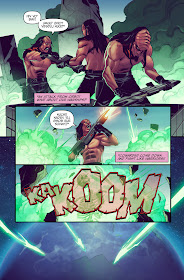 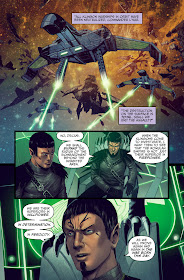 Johnson also talked Comic Book Resources and Geek Magazine about the Khan series, continue after the jump for highlights from both interviews: 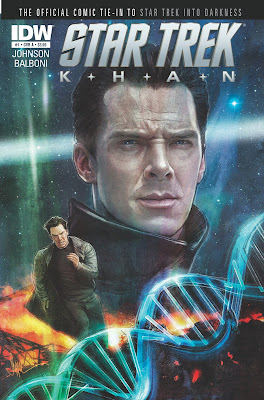 Johnson outlined what the series will be covering, both before and after Khan has his centuries long nap, including teasing how they're going to deal with the altered appearance of Khan despite his pre-alternate timeline divergence origins:


This new miniseries shows us the life of Khan from his earliest days through to the events of "Star Trek Into Darkness," and even a little beyond. We go deep into his origins, which takes us back to the late 20th Century as we see how the Eugenics Wars unfolded.

Well, all we know about Khan's origin is what we've seen in "Space Seed" and "Wrath of Khan," and we are not changing any of that. In fact, we're sticking to those canon sources and extrapolating out from there. It's really only bits and pieces. As for whether absolutely everything was the same in both timelines before Nero came through, I like to point out that, if you want to get absolutely literal, the physical look of Kirk, Spock and the rest are slightly different. Shatner doesn't look like Pine, etc. So who's to say there aren't subtle changes in other things?

His life takes a dramatically different course than it did “Space Seed” and Wrath of Khan. To tease it a little bit: the circumstances of his revival affect him both physically and mentally in unexpected ways.

Johnson also mentioned there will be some sort of follow up to Khan in the ongoing series next year, but gave no specifics.

You can see the covers and blurbs for both the forthcoming ongoing comics, and the first issues of the Khan series, in IDW's September, October, and November solicitations.