With the fortnightly Starships Collection now under-way, I've been talking a lot about the model and magazine series from Eaglemoss lately. But they certainly aren't the only starship builders in town; other shipyards, producing ships both larger and smaller, have also been busy lately.

Just released by Round 2 Models, is their latest version of the 1:1000 scale NX-01 model kit, which comes with new parts to build the refit design. Here's the box art, which features a new rendering of the NX-refit from Doug Drexler: 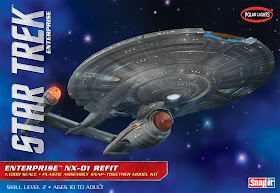 Round 2 have also recently added a listing for a re-release of their AMT 1:1400 scale Enterprise-E kit. They expect that to be available from November.

If you prefer your starships pre-built, then look no further than the latest addition to DST's ship range. They have announced a new battle damaged variant of the Enterprise-B, featuring Nexus inflicted wounds as seen in Generations. You can look forward to reenacting the "death" of Kirk next year: 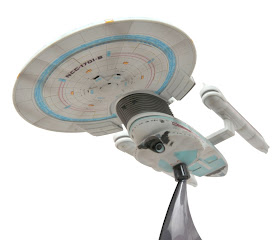 You could also simulate a bit of space turbulence for the Enterprise with Bif Bang Pow's new USS Enterprise bobble-ship. That's coming in November according to Entertainment Earth: 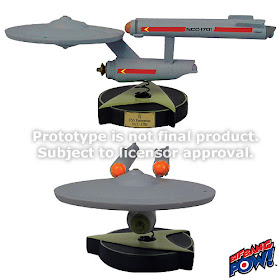 Finally if you like your starships at a smaller scale, then you must surely be looking forward to this month's release of the third wave of ships in the Tactics Heroclix game. Wizkids have been previewing these for the past few weeks, continue after the jump to check out many of the ships on the way: