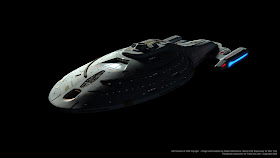 TrekCore recently ran a series of articles celebrating Voyager, the cherry on top of their week's coverage was an article by Star Trek visual effects artist Rob Bonchune, who described the history of the use of the CGI models of the USS Voyager, including his own work finessing the main model they used:


CG was coming into play more and more on television shows during the mid-1990's, as a way to get a faster turnaround for the money spent and to make redoing shots far easier without the high expense of repeating an entire motion control miniature shot.

Although a practical filming miniature of Voyager was built for the show, the producers - especially the VFX Producer that worked with me, Mitch Suskin (and of course Dan Curry) - were planning to move completely towards CG models by the last few years of the series, if the technology proved viable. Two versions of the CG Voyager were scanned from the physical model, and built before the series began - one was built in Lightwave by John Gross, Bruce Hall, and D. H. Jones from Amblin Imaging; the other was created by Santa Barbara Studios using "Dynamation," their in-house design software.

Amblin Imaging had access to the physical miniature, and took detailed shots of the model as closely as possible - to use the actual physical model's surfaces as textures on the Lightwave CG Voyager. It turned out to be a great idea, and for the most part, it worked very well.

I was working for Foundation Imaging when I was finally assigned to Voyager full time, and that's when I had the chance to examine the existing Voyager CG model we had to use every week. I really wanted to give the CG model a major facelift so being new to the show, I asked Mojo - who was my Supervisor at Foundation Imaging on Voyager - and Mitch Suskin who was his Mojo's supervisor from Paramount - if, even on my own time, I could implement some changes to more accurately match the filming model as I felt we could not use it as it existed at the time. (This was all new to me back then and little did I know what the future held!). Using both good, clear shots of the physical model, and looking at the maps that Amblin had created, I set about pinpointing the areas that needed most work...

The article also includes some brand new renders of Voyager, including pretty shots like these: 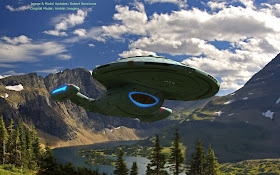 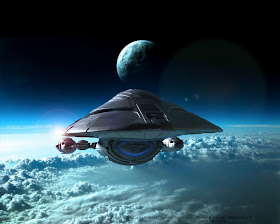 You can read lots more about the use of CGI in Voyager, and Bonchune's refinement of the primary model, on TrekCore, where you can also see loads of new renders showing off that model. Fingers crossed we get to see the model in HD motion if the Star Trek remastering efforts manage to get as far as Voyager some day. 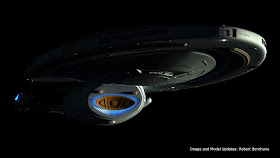 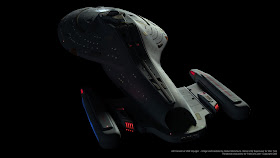 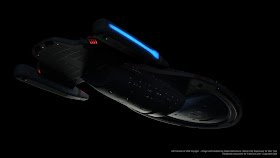 PS. If you like pretty pictures of ships, you might enjoy my recent articles on the USS Titan, Pierre Drolet's starship graveyard, the new Deep Space 9 (and some more), and previews of next year's Ships of the Line calendar.