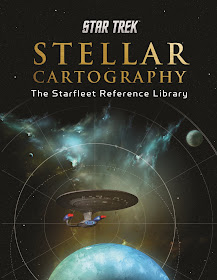 TrekFM's Literary Treks program recently ran an interview with Larry Nemecek, author of the forthcoming book and maps set Star Trek: Stellar Cartography. Nemecek talked at length about the new book, describing how it has built upon the system established by Geoffrey Mandel in the previous Star Trek: Star Charts book, while adding in information from canon events since the publication of that book, and putting new spins on the presentation of the Star Trek universe in some of the newly developed maps in this release. In an effort to clarify how this release is more than a book, Nemecek described the format for the release:


The thing itself - I was talking about it not being exactly a book - What you get is a clamshell; so it opens up like a book, and it's a tri-fold. The two outer things have a pocket; there's ten maps, twenty-four by thirty-six inches (two by three feet), on a really cool paper stock that doesn't crease easily. So even though they're going to be folded, if you get them out and you want to frame them right off the bat or something they're not going to do like the old maps, the old blueprints would always do, which was crack after you've used them a little bit. So there's a pouch on each side, and there's five in one, and five in the other. Then the book, although there's tones of text in it, it's going to feel a little bit like a giant hardback childrens' book. So there's like a spread for each map inside, the text. On one hand it's more visually heavy than it is textual, but on the other hand there's some really important textual concepts that I got to play with and massage; to me they've either been a gap, or there's things that's been bugging - and it's like I see fans running round in circles arguing - and although this obviously isn't aired canon, it's my way of saying "Peace! Peace! There is no need to be so confused and divided about this".

Like 47North's previous release, Federation: The First 150 Years, this collection is presented as commemorative hard-copy document produced by Memory Alpha:


The timing of this collection, is the year before the Hobus subspace supernova. So everything is set out to normal time, and then there's just a little bit of an update in the Romulan section.

Since the release of Star Charts there have been three more seasons of Enterprise and three movies released, giving Nemecek and the artists working on the book plenty of new information to add into the galaxy.

The biggest element to be incorporated from Enterprise was the Delphic Expanse. Considering how it was described as relatively close to Earth, yet also a vast area of space, they had to move away from the usual top down view of the galaxy to incorporate into into the layout of existing known space. To accommodate it they considered it as a large vertical space going through the disc of the galaxy, so from above it seems a small area, but from other angles its true scale is revealed.

While the publication doesn't seem to include any nuTrek geography, the first film did leave its mark on the prime timeline, with the destruction of Romulus thanks to the Hobus supernova. This will be detailed in the new maps, with Hobus and the subspace shock-wave it sent out incorporating descriptions already established in the Countdown comics and Star Trek Online.

The new maps will also include much more detail on the Dominion War than the previous release: They decided to disregard some of the maps seen on-screen to some extent, treating them as representative of movements in the war, rather than accurate maps, as they were too inconsistent and/or inaccurate to reconcile. In order to make sense of how the Federation homeworlds, distant from the bulk of events seen around Bajor and Cardassia, were under constant threat, Nemecek developed the idea of a distant front in the war, reaching into Federation space, which he described with an analogy to Earth geography:

Geoffrey Mandel contributed a "History of he Federation" map, which Nemecek described as three times better than the Star Charts maps, and compared it to the a National Geographic pull-out map. The other maps were split between Ian Fullwood and Ali Ries. Fullwood produced the "straight maps" including:

Ries meanwhile has developed the alien maps in the book, including an ancient Vulcan map of the Vulcan system, a pre-Organia Klingon map, heavy on propaganda, a TNG-era Romulan government map, and a Cardassian map from before the withdraw from Bajor. Reis also made an art-print map:


...it's an accurate art print of all the major empires and their extent. So it looks like a representational colour blob thing, it's almost like Jackson Pollock primary colours, but it's all for real, and it's based on Geoff's map.

There are also maps of the Dominion War, and a Romulan War/Birth of the Federation map. To hear much more discussion of what's in Stellar Cartography, and a bit more about Nemecek's background in Trek reference books, have a listen to Literary Treks.