Several companies have revealed new Star Trek stuff to use at home, and when out and about. Coming soon to Westland Giftware's Star Trek range is their latest cookie jar, and I think their best one so far; based on the USS Enterprise, they've filled in the gaps between the nacelles to make a warp effect, so there's plenty of room for cookies within: 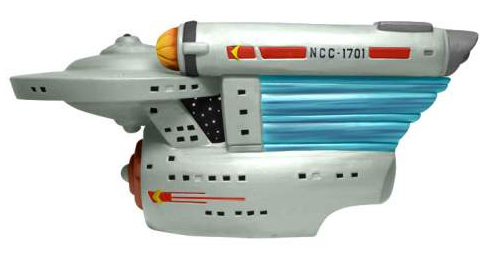 Also new from Westland is something they've not done before, wine stoppers. They are launching three different TOS designs, the USS Enterprise, Captain Kirk, and Mr Spock. Their website also has an an image of what I believe is a counter-top display unit they'll have for these in shops: 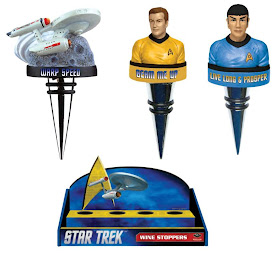 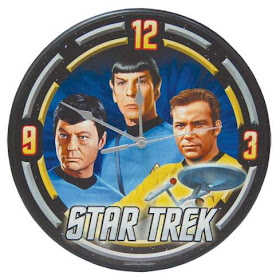 It's normally a few months before new stuff Westland display on their websites is available, so I'd expect these to be turning up towards the end of the year. Meanwhile, they aren't the only ones make Star Trek clocks, earlier in the year Underground Toys announced a pretty big range of watch and clock designs. Things From Another World are now listing a selection of these, expecting them to come in August. Their listings include better images than those previously released.

From the watches they are offering the USS Enterprise saucer design, the command uniform watch, and a Captain LCD watch (although they haven't posted an image of the latter yet): 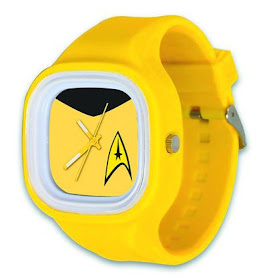 They have two of the clocks, both bell alarms, either an Enterprise-D image as the face, of a TOS Starfleet delta: 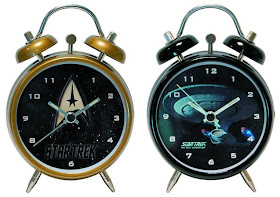 They are also offering one of Underground Toys' float-pen designs, the USS Enterprise. I particularly like their description for this one, sounds like an especially terrible Gold Key comic:

From Underground Toys! The starship Enterprise has become trapped within the shaft of this floating pen!

Finally, Vandor have added one new item to their Star Trek range as well, coming in August or September will be a ceramic travel mug, with the Starfleet delta on: 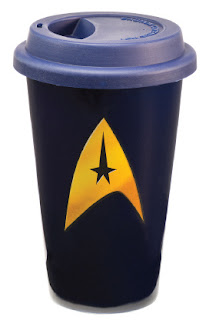