You might recall, Acer has a promotional relationship with Star Trek Into Darkness, including several TV adverts, and a special website, Explore Beyound Limits, with wallpapers and such, to promote the film, and Acer's Iconia tablets and Aspire laptops. It seems Acer did one more tie-in, and produced twenty-five Star Trek branded versions of their new Aspire R7 notebook (which uses a funny hinge to flip the screen about in many different ways). All but one of these laptops, with a Starfleet delta etched into the casing, have vanished to places unknown. That one remaining notebook however, is to be offered for sale, as a charity auction on eBay, starting later this month. Proceeds from the sale will be split between The Mission Continues, and Save the Children. 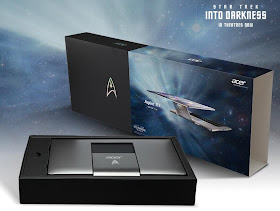 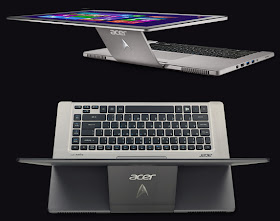 There will also be auctions for Into Darkness posters signed by the cast. The Inquirer also report that some of these auctions, presumably the laptop, will also include Star Trek: The Video Game, and the Into Darkness soundtrack. You can sign up to be notified when the auctions begin, on eBay.

If you missed them before, here (after the jump) are Acer's amusingly odd Into Darkness adverts, featuring laptops in spaaaaace: