Stock up on Romulan starships ready for the Legacy of Romulus

Star Trek Online's new Romulan expansion, Legacy of Romulus, is just a month away, and to prepare players Cryptic are offering two packs of extra bits and pieces; so you can set yourself up as a very well equipped Romulan. Both packs are discounted ahead of the launch of the game. The "Starter Pack" gets you a light and retrofit version of the T'Varo class warbird (Enterprise-era Bird of Prey), a Borg Reman bridge officer and the title of "Survivor of Romulus". The "Legacy Pack" has all that, along with many more ships, more Reman character options, Reman uniforms, master keys, and the titles of "Survivor of Remus" and "Rihannsu". Most of these I expect will available separately later as well. Here's a video introducing the packs:

The ships in both packs:


The famed D'deridex is upgraded with a Projected Singularity console that allows you to channel your Singularity Core into a mobile rip in the space-time continuum. Unlocks at Tier 5 (Vice Admiral).


A variation of the mighty D'deridex Class with a Molecular Phase Inverter console that can be activated to shift your ship out of phase for a limited time. Unlocks at Tier 4.


The Mogai Class, as seen in Star Trek: Nemesis, is upgraded with an Ionized Particle Beam console. It empowers all of your energy weapons with a negative Ion charge which can expose enemies to a powerful Ionized Particle Stream generated by your ship. Unlocks at Tier 5 (Vice Admiral).


A variation on the famed Mogai Heavy Warbird with a Shield Absorptive Frequency Generator console that will bleed energy from your target's shields and add it to your shields. Unlocks at Tier 3.


Larger than a T'Varo and includes a Singularity Inverter console which allows the captain of a Dhael to use the ship's Singularity to absorb some of the power of incoming attacks. Unlocks at Tier 2.


The Dhelan Warbird is upgraded with a Sabotage Probe console that will penetrate an enemy's shields, attach to their hull and siphon off weapons power until it takes their weapons offline. Unlocks at Tier 5 (Rear Admiral).


Light, fast and maneuverable, this ship includes a Singularity Stabilizer console that will bring an offline Singularity back online and provide a gradual boost to Singularity power. This is a starting level ship and unlocks at Tier 1.


The great look of the 2150s-era Warbird with power for the 25th century. Includes a Plasma Destabilizer console that launches a slow moving but devastating Destabilized Plasma Torpedo that deals extreme kinetic damage and heavy plasma damage over time. Unlocks at Tier 5 (Rear Admiral).


Made famous in Star Trek: Nemesis, the Scorpion fighter is fast, maneuverable, and has a small, highly efficient Singularity Warp Core capable of using the Singularity Overload ability to fire a devastating barrage of attacks.

More images of the ships and other features from the packs, after the jump: 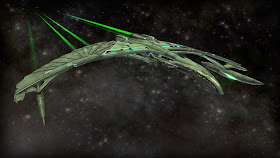 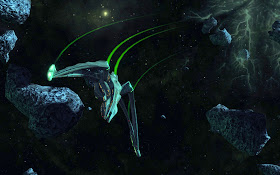 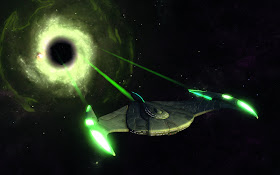 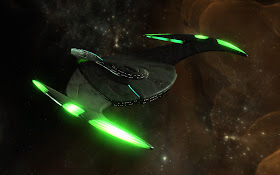 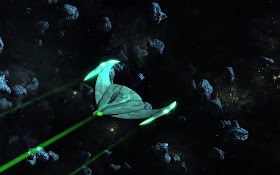 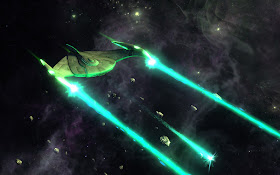 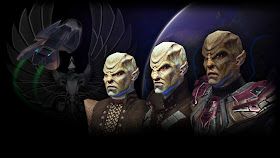 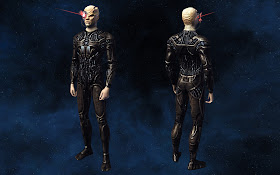