So much Into Darkness stuff popping up all over the place at the moment! Here's a round-up of the latest, starting with a a clip from the film released by AOL:

There's also a new TV trailer TrekMovie has posted, which has some new bits of footage:

Here's what that Mr Harrison had to say:


James Tiberius Kirk. The heart of the Enterprise. The overly-confident leader, fuelled by bravado. Life for him is one big adventure. But he is alone. Born into battle, the heir to legend. What does a man do with such a curse? He fears making the mistake that will get his entire crew killed. And I, I will make sure of it.

Another bit of narration we shall soon be hearing is Alice Eve, reading Alan Dean Foster's novelization of the film. Amazon has now updated its listing for the audiobook version, with a cover. Not so surprisingly it it is a squareish version of the book cover, which uses the first poster image. I wonder if this is actually the final version, it doesn't seem quite squat enough for a CD case, and there's a black bar down one side: 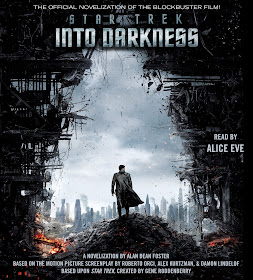 Some other promotional things are starting to appear now: Acer has launched a website, which is cross promoting its Iconia tablets (with a gateway ap??) and Aspire laptops. The site includes wallpapers using promo photos, such as these: 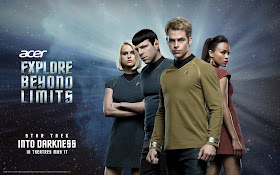 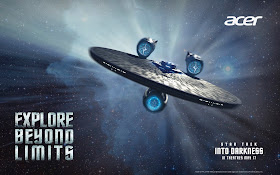 There is also a series of adverts would quite amusingly inter-cuts footage from Into Darkness with laptops flying around dramatically. Here's a playlist of the three so far:

Mazda has also released an advert, which starts with a cool animation of the Enterprise forming out of lines, and then is all about a car... See that after the jump, along with more stills, behind the scenes images, uniforms and more!

Entertainment Earth have now added the Starfleet under-shirt to the range of Anovos uniform replicas due for re-released around Into Darkness: 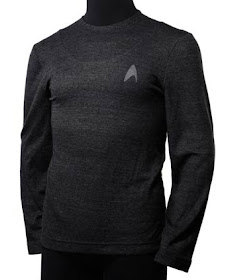 MTV and the Star Trek Facebook page have released these two new stills from the film: 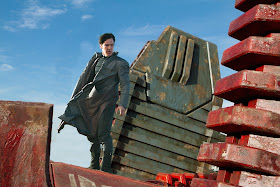 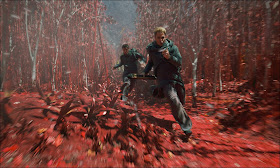 Meanwhile io9 have released a collection of behind the scenes photos of the bridge set. Here are a few of my favourites, you can see lots more, including details of lots of consoles, on io9: 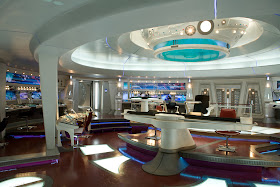 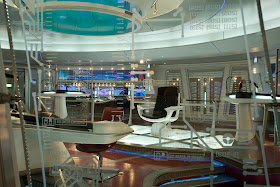 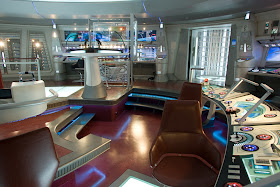 Finally, the cast and crew of the film are down in Australia, ready for the world premier tomorrow. While they wait, a few of them popped up to have their photos taken with Star Trek surf boards (via Zimbio): 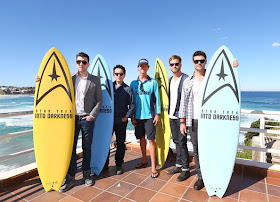