A working phaser is on the way from Novo Geek (Anovos's off-shot that makes geeky curiosities, such as the TOS uniform ties and a pretty sweet Battlestar Galactica USB Viper), sort of working at least, it fires a laser, for pointing at things! It's a keychain as well. Here is the miniature phaser, ready to make your presentations stunning: 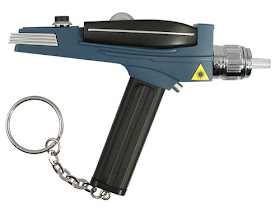 Here's how Novo Geek describe it:


Are you tired of giving the same old presentation? Scared to lull your Gorn-like audience to sleep? Perhaps your cat needs another hobby? It's time to make way for the absolute coolest laser pointer this part of the Alpha Quadrant! Your dreams have come true and all your wishes have been granted with this amazing Star Trek the Original Series Phaser Laser Pointer Key Chain! Set your presentations to stunning as you whip out your Phaser pointer to unleash fury on charts, graphs, and other items of importance. You will marvel at the detailing and functionality as you depress the trigger and watch the acrylic tip illuminate red with your pointer. Your audience will surely take notice, bringing them to full alert as you deliver a command performance masterfully... just like Captain James T. Kirk would, were he in your place. 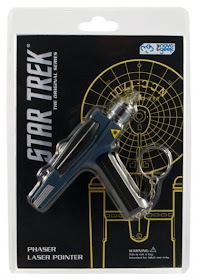 Expected in April, this laser phaser is just one of three miniaturised light-up phasers coming over the next few months; sitting along side the Underground Toys torch keychain and Running Press' light-up model that comes with a tiny book. DST's full size phaser toy has just recently been re-released too, so it's a pretty good time for phaser lovers!

In other phaser news, continue after the jump to check out the amazing original phaser riffle prop, which is coming up for auction soon, as well as the lovely USS Kelvin homage to the classic TOS phaser: 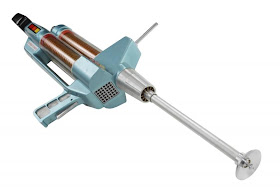 This phaser rifle, as seen in Where No Man Has Gone Before, is up for auction from Julien's in a little over a week, estimated to go for $50-70,000! Here's the auction's description which highlights some of the cool features of this impressive prop:


This one-of-a-kind weapon was created by toy inventor Reuben Klamer at the behest of Star Trek creator Gene Roddenberry. When the original pilot presented to NBC was asked to be retooled for a more action-packed adventure, Roddenberry asked for a really big gun. Klamer designed and created the weapon at no charge to the production in exchange for potential licensing rights to the weapon. When production was wrapped, the piece was returned to Klamer and replaced with the now familiar pistol design used throughout the remaining three seasons of the original series. While this weapon was never seen again in the series, it was used in a number of studio-commissioned publicity photos and even represented on an early lunch box for the series. The weapon is constructed out of wood and finished with a blue/green metallic paint. There is additional detailing, including the hand-tooled aluminum barrel and spring-loaded trigger, a sliding switch to adjust the force setting, three plastic non-functional domed indicator lights and inset plastic panels as well as a telescoping antenna mounted to the top. Moveable pieces on the weapon include three acrylic “Turret Tubes” cylinders with what appears to be copper painted metal conduit with ends painted to match the three force settings. The entire turret unit turns on a center axis. The black shoulder butt also rotates to be used as a handle or shoulder stock. The weapon comes in the original custom-made case made to deliver the rifle to the studio. 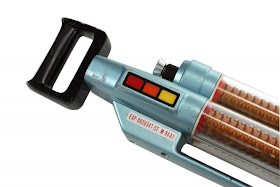 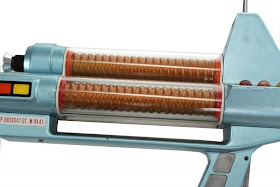 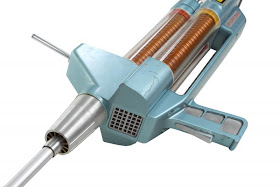 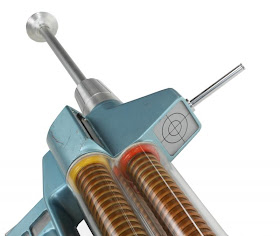 And while we're on the subject of phasers, check out this beautiful prop made for the crew of the USS Kelvin in the first nuTrek film. Images via The Jefferies Tube: 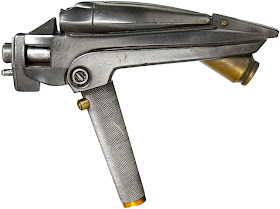 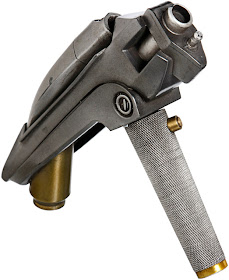