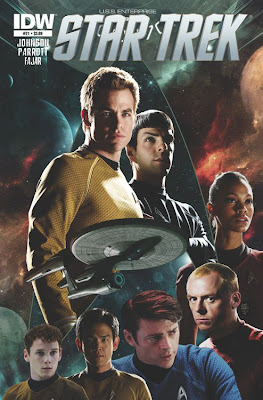 At this weekend's WonderCon event IDW announced the first details of a comic book sequel to Star Trek Into Darkness. We already knew issue twenty-one of the Star Trek ongoing series would be picking up after Into Darkness, and now we know that will be the first of a three part story called After Darkness (a title which sounds kind of sordid to me...). Comic Book Resources interviewed the series writer, Mike Johnson, about After Darkness. The story is of course is as wrapped up in secrecy as Into Darkness, but he could give us some ideas of it's place in the nuTrek story, with After Darkness acting as the the third part of a trilogy of sorts after Countdown to Darkness and the new film:


The comic story picks up a few days after the movie ends, then jumps ahead about a week. The storyline address the fallout from both the film and the prequel miniseries "Countdown to Darkness." The hope is that the prequel, the movie and the ongoing series tell one big epic story that continues into the months to come.

Not able to give any story details at this point Johnson did promise we'll see:

And that some of the themes covered will be:

You can read the full interview, here. See my previous coverage to read the solicitations and see the covers for part one, and part two. Part one (Star Trek ongoing #21) is currently available for pre-order from Things From Another World, or Forbidden Planet.