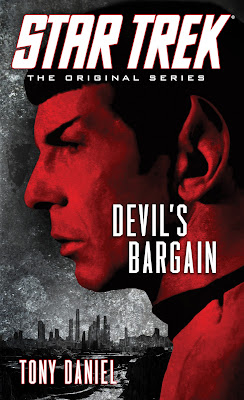 Simon and Schuster have posted an excerpt from this month's new TOS novel, Devil's Bargain, by Star Trek newbie, Tony Daniel. Here is the start of chapter one:


Captain’s log, Stardate 6397.3. We have established orbit around the frontier colony Vesbius, a settlement just outside Federation jurisdiction in the Omega sector. On the planet below is a colony of nearly 20,000 people, including many families. The conjugated orbits of the planet’s moons have unexpectedly perturbed an asteroid and the huge rock is now on a path to strike the planet—and destroy the colony. Although the colony is outside the Federation, the colonists are human and have strong trade and cultural ties to the Federation. Our mission is to offer assistance and support in the evacuation of Vesbius.

The ship’s intercom whistled and a look of resignation passed over the face of Captain James T. Kirk. He was on a treadmill in the Enterprise workout facility and was near the end of a simulated twelve-mile run to the top of Pikes Peak in Colorado. The treadmill was tilted to its steepest incline, and Kirk was sweating up a storm. He’d done this run before, but now he was working on a personal best.

It would have to wait. Kirk mashed the stop button and hopped off the treadmill as it was slowing down. He picked up a towel from a nearby rack and mopped his brow while pressing the button on the workout room intercom that connected him to the bridge.

“We are preparing to enter orbit around the planet Vesbius, Captain,” said Commander Spock, who had the conn on the bridge while Kirk was away.

“Correct me if I’m mistaken,” Kirk replied, “but I thought we weren’t due to arrive for another twenty minutes.”

“It seems that what Mister Scott described as his ‘wee bit of tinkering and tweaking’ on the antimatter recombination unit of the warp drive has had a beneficial effect,” Spock responded acerbically.