It looks like the Kelvin and co won't be the only new Hot Wheels Star Trek starships this year, we can also expect new smaller scale version of the nuTrek USS Enterprise. As reported by T-Hunted, already appearing on sale in Malaysia is this new nuTrek Enterprise, hidden amongst Hot Wheels' similar sized toy car range as part of their "Imagination" line, which includes other vehicle designs from fiction such as Bat-mobiles and Angry Birds vehicles. Here she is: 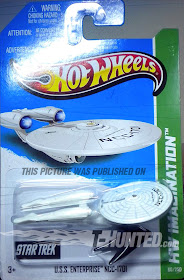 Thanks to my regular reader and toy expert Darth Duranium for pointing me toward this one.