The latest Star Trek comics news, starting with IDW's May solicitations. No new series launching this month, but the ongoing series continues, and promises to take us onwards after Star Trek Into Darkness. The whole gang on the cover make this look like a nice jumping on point for new readers post-Into Darkness, and one might be inclined to read into it that everyone survives, and along with the Enterprise, are ultimately unharmed by events in the preceding film - Of course covers can be misleading! Here's the official description:


The hit ongoing STAR TREK series picks up right where this year's blockbuster sequel STAR TREK INTO DARKNESS leaves off! Don't miss the all-new adventures of the crew as they go boldly into the unknown, in a story overseen by STAR TREK writer/producer Roberto Orci! Also out in May is a re-release of the first ever TNG comics. This title appeared on Amazon a little while ago, listed for June release, so seems to have been brought forward slightly: 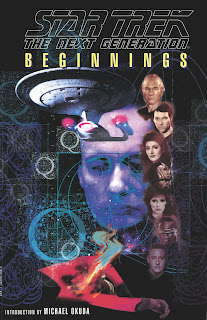 
Set during the earliest voyages of “The Next Generation” series, join Picard, Riker, Data, Worf, Troi, Yar, and Laforge as they learn about each other and encounter: A de-powered Q who seeks refuge aboard the Enterprise as he attempts to learn what it means to be mortal; A world where warriors see battle as a child's game; A world with dark secrets that threaten both the ship and crew, and more.

Looking a little further ahead, Amazon have added a listing for Star Trek, Volume 5, which will most likely contain issues seventeen to twenty of the ongoing series. They expect that to be out in July.

In other comics news, TrekWeb recently ran an interview with artist, Joe Corroney, who talked about how he developed his artwork on the Hive miniseries: 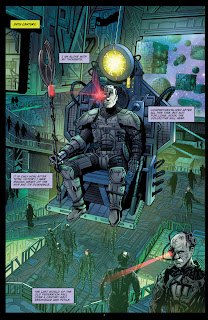 The scripts by Terry, Travis and Brannon Braga were extremely well-written, they were just so well paced and contained lots of great information and ideas for the visuals. I really try to more or less nail what the writers are hoping for but they also gave me room to conceptualize the look of new characters and environments visually too. In some ways, the scripts were very epic and so ambitious with some pretty extreme visuals which I either had to reign in with my art because of lack of time in the schedule or because I was trying to stay a little more consistent to the visual style of Star Trek, I think. Some of the more over the top scenes and visuals in the script regarding the Borg would work really great in the comic book storytelling format, but on the other hand they would seem a bit too extreme to me for a Star Trek story, especially with my more realistic cinematic style. So I would sometimes work with the writers via email or over the phone with Brannon to come up with a compromise and find a nice balance for some of the ideas that would fit in the world of Star Trek but still look dynamic, exciting, and really cool and hopefully get their idea across.

Specifically, with Locutus' scepter in the shape of the Borg logo, which was a really cool idea on paper and we tried it in the first issue visually, ultimately just didn't sit right with Brannon and me once we saw it on the page. We agreed that the Borg aren't materialistic, carrying objects or having effects of any nature, and the idea of them even having a "logo" or a "symbol", which is something more of a licensing thing and not a real visual you ever see in the shows or the movie, seemed out of line with the ideology of the Borg. The species just wouldn't represent themselves or their identity with some kind of logo branding. Tying in the Borg logo visually to Locutus' scepter seemed like a fun little detail at the time but by the second issue we decided to ditch it since the scepter was just more of a visual cue to establish him as the "Borg King" anyway. Though for continuity sake I did find a way to bring it back in issue #3 when Data and Locutus are fighting the Queen in the future timeline. If you look closely you'll see that Data is fighting her with Locutus' broken scepter, it's just missing the Borg symbol on the end of the staff and he ends up piercing her chest and wounding her with it. So I just repurposed it as a weapon. I imagined maybe Locutus called the scepter back to him "off screen" and it just floated back into the scene when he and Data needed it. 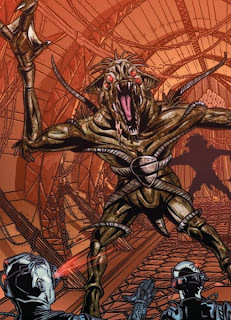 Describing his design for the Voldranall:


I was given a short and simple line of description in the script that they looked like something that was a cross of the monster in Cloverfield and a nightmarish H.P. Lovecraft-ian type creature, just something as ugly, horrible, and menacing looking as possible. So that really was my jumping off point. I kind of designed them like these giant, walking mutant bat creatures with tentacles, since bats kind of look like demons in a way. I wanted the Voldranall to look more demonic and animalistic than Species 8472 since I knew comparisons might possibly be drawn to them in this story. The tentacles gave them that extra alien feel they needed and a slight Cthulhu or Japanese monster feel, too. They were very fun to draw and design. 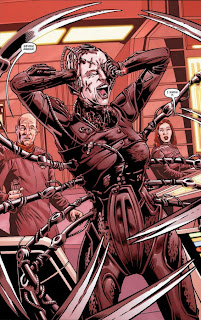 And how he approached Seven of Nine's spider-form:


This was one of my favorite scenes to draw in the whole series actually. I'm a huge horror movie fan so getting to push the limits of Star Trek with some imagery like this was pretty cool. Really, the Borg themselves are pretty horrific. I mean there are elements from Best of Both Worlds and First Contact that would fit visually and metaphorically at home in a horror film. I think with the Hive, though it is a comic book series which allows for boundaries to be explored and pushed in this medium, I did feel a responsibility because it is Star Trek, like I do with any licensed property I work on, to stay true to its voice. I wanted to explore and push the envelope and make things fresh and exciting visually whenever I could but I also sought to stay true and keep things feeling familiar or tonally consistent to the identity of the property which is why fans love it to begin with. I didn't want to go too extreme in my artwork when it didn't call for it but other times it was exciting for me and even necessary to add some new layers to the mythology of Star Trek with some pretty dynamic, new visuals.

For that particular version of Seven of Nine, where's she's evolved into the horrific spider drone creature, I actually had to tone it back a bit. In the script she was described more as a cross between a snake, spider, and scorpion type creature. She was more massive, too. I knew going in though if I made her too large that it would make for less intimacy in the dialogue scenes after she was defeated. I didn't want to keep having to pull the camera viewpoint so far out for the readers just to show off her scale, since there really weren't too many action panels of her to begin with. So I tried to compromise and keep her ominous and creepy looking, but not too monstrous so I could keep tight on all the characters whenever I could in the short scene.

You can read much more on TrekWeb, where Corroney discusses Hive, his contributions to the Star Trek ongoing series, his recent work on Federation: The First 150 Years, his forthcoming Stuck on Star Trek book, and more!