Diamond Select Toy's first alien ship in their range of Star Trek starships, the Klingon Bird-of-Prey, has only just started to appear on collector's shelves. Expected sometime down the line is a HMS Bounty variant, with landing gear. But now it seems they've been using their Klingon guile to work on another variation, which is available right now! Exclusive to Action Figure Xpress is the partially cloaked Klingon Bird-of-Prey, made with translucent plastic, which makes it very glowy when the lights are on. Here are a few images: 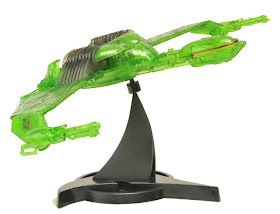 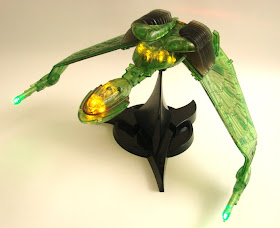 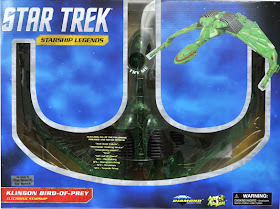 And here's a video of all the light and sound effects:

You can even get it for free, if you spend $70 on a certain selection of stuff AFX have designated part of a promotion (though that only runs until February the 4th, so get your socks on).

DST also recently updated their ship dates again. Here are all the Star Trek items expected from February onwards:
Also on the way from DST, but not currently on their ship date list are: