Thoughts on the IMAX preview, plus new Into Darkness blurb

Living just about within reasonable range of an IMAX cinema I went to see The Hobbit yesterday, mainly so I could enjoy the nine-minute preview from Star Trek Into Darkness. And enjoy it I most certainly did!

It kicks of with a short sequence in London, where a family wake up and travel out to a country hospital to see their sick daughter. There John Harrison suggests to the father that he can save the ailing child.

There's lots to see and get excited about just in these brief few scenes. I shall start with London, which has been very coolly brought into the future, with familiar present day landmarks sitting aside masses of towering skyscrapers. Very similar (maybe the same matte "painting") as the poster's view of London:

Then out in the countryside the lush green hills and fields of England are supplemented with new mega-structures, much like those previously seen in the distance in Iowa. I like this subtle futurisng, making a familiar scene just a little unfamiliar. Star Trek: The Art of the Film suggest the Iowa structures are some sort of "mega-farm factories", although personally I imagine them as self contained verticle cities in the countryside.

Much like the first film, the 23rd century of the new timeline feels familiar, if it weren't for the stardate flashing up at the start you'd think you were watching a contemporary drama opening, at least until the reveal of future London.

Aside from enjoying the designs this sequence also raises a lot of questions: Who are this family, and what is wrong with their daughter; something the miraculous medical technology of the 23rd century cannot fix. And of course, what is John Harrison offering to cure her? With one's mind full of the ideas of something at the very least Khan derived, one ponders the possibility of illegal genetic modification. We'll soon see I'm sure.

Moving on, the bulk of the preview shows us the Enterprise crew meddling in the affairs of a pre-warp civilization on a planet threatened by a volcano. While Kirk and Bones draw the locals away from danger, Spock is busy trying to turn the volcano off!

The whole sequence is delightfully reminiscent of classic Trek, with the Enterprise bunch getting involved with primitive peoples. Of course it looks far more impressive than any such TOS encounter. The aliens themselves are not extravagant in their alienness - They are basically humans painted white, but they still look very impressive; as if they've just come out of the interstellar version of the National Geographic. Likewise their planet looks great, with lush red forests, presented to us with a sense of scale and realness those classic alien planets couldn't hope to achieve.

This section was really fun, both on the planet and the Enterprise there was an enjoyable smattering of jokes which further helped make this feel like a proper TOS adventure.

This section was also a good test of the 3D, with the spears the natives were throwing at Kirk and McCoy zipping right out of the screen, and the Enterprise getting a particularly pleasing 3D reveal. I am pretty sceptical about seeing this film in 3D, because it's post-converted; I'm a big 3D fan, and I hate to see it done half-heartedly - I will begrudgingly admit this first sequence was a pretty flawless conversion though; there were only one or two shots in the London sequence where the 3D looked a little less than amazing, and by the time we got to the Enterprise section I was enjoying the whole affair too much to get distracted by any flaws their might have been (it surely helps that this effects heavy section is probably mostly proper native 3D, with it being relatively easy to add the second perspective virtual camera into the CGI bits).

Spock trying to deactivate a volcano with a little box seems silly, but enjoyably so, again making me feel like this is pure classic Star Trek. Spock ending up in peril also afforded him the chance to use the "needs of the many outweigh the needs of the few" line - An interesting early use in the film which makes me wonder if this is more than a neat reference back, but possibly a notion that will be called upon again later in the film (also, coincidence that this line joins Carol Marcus in things drawn from Wrath of Khan?). Similarly they go out of their way to explain what the prime directive is, another set up for more significant events later maybe?

The other major element of this section is the fact the Enterprise is underwater! This makes a pretty cool reveal, gives Scotty some great lines complaining about it, and gets our crew in new wetsuit uniforms. I really hope there's a good story reason for them deciding to hide the Enterprise in this fashion though, rather than say, in orbit, as they would around any other planet. It looks cool, it's funny, but does it make sense?

We are left with a cliffhanger, Spock is stranded inside the volcano; will Kirk risk revealing the Enterprise to the natives, breaking the prime directive, to save him? Well, obviously yes, because we know Spock is alive later on thanks to the trailers. The same trailers that have shown us the Enterprise rising out of the water! Maybe this section is what leads to Pike dressing down Kirk for his lack of humility (also in the trailer)?

My overall impression of the preview was overwhelmingly positive, it was a very exciting, rich, and funny experience, and set up several dangling threads that make you just wish it was May already! I was also pleased to here, waiting for a tram after the screening (and two and half hours of The Hobbit later), people talking enthusiastically about Star Trek, saying how awesome it looked and that they'd be pre-booking tickets. Who knows if these were enthusiastic Trekkies already, but lets hope maybe not, so this preview has helped welcome more followers into the church of Trek. Amen. 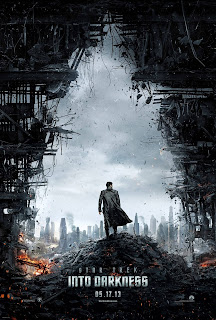 In other Into Darkness news, TrekMovie report that Paramount have released a new blurb for the film. The middle section has been changed from the first blurb, giving us some new ideas of story:

In the wake of a shocking act of terror from within their own organization, the crew of The Enterprise is called back home to Earth. In defiance of regulations and with a personal score to settle, Captain Kirk leads his crew on a manhunt to capture an unstoppable force of destruction and bring those responsible to justice.

As our heroes are propelled into an epic chess game of life and death, love will be challenged, friendships will be torn apart, and sacrifices must be made for the only family Kirk has left: his crew.