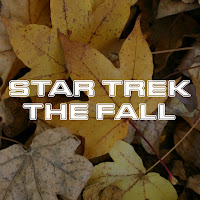 TrekMovie have posted a summary of next year's Star Trek novel releases, which includes new details of the TNG-era crossover series, The Fall. Una McCormack joins the four previously identified authors for the series, with her novel, according to the most recent edition of TrekFM's Literary Treks podcast, set to feature Picard and Garak. TrekMovie also revealed titles for all the books in the series:
UPDATE: Dayton Ward has let me know the title for his book is currently considered a placeholder, until he finishes the outline for the book and decides what to go with perminently.

The initial DS9 book is the only one with any sort of listing from the publisher or retailers so far, if you missed the initial blurb for that book it gives us a brief overview of the entire series:


The Federation is rocked to its core as the Typhon Pact is suspected of being behind a barbarous act that shatters the fragile peace of the Alpha Quadrant. An original Star Trek novel, this is part of a five-book story arc that takes place over a sixty-day period, but it is not necessary to read each novel in order to follow the storyline, which involves all aspects of The Next Generation and Deep Space Nine universes.

UPDATE 2: Dayton Ward has now also blogged about the series, in which he revealed his book in the series will focus primarily on Picard and the Enterprise-E crew. He also noted however that this series will have more direct crossovers than the initial Typhon Pact series:


...unlike the previous Star Trek: Typhon Pact mini-series which utilized this basic notion of multiple authors and casts, the books this time around won’t be so locked in to a single crew. Expect more in the way of team-ups/collaborative action from across the various groups of characters.