Paramount have released the first theatrical poster for Star Trek Into Darkness: 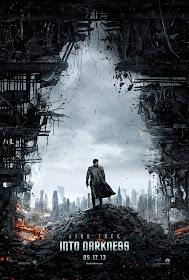 Looks, well, dark, as one might expect from the title, and terror filled blurb. It undoubtedly also alludes to The Dark Knight; with this poster all but mirroring the dark wind swept cape, and an explosive version of a familiar emblem from the franchise in the artwork for that film. I'm sure the future will continue to be filled with the bright lens flares of optimism though; so we're all good.

Now look closely, and you might spot several London landmarks; I've found the gerkin, London eye (and nearby bridges), and St Paul's Cathedral so far. Will my future fellow Britons be facing the "unstoppable force of terror" of the mysterious bad-guy??