Klingon Bird of Prey, in a box.

Just a few week from release, Diamond Select Toys have revealed the packaging for their latest model starship, the Klingon Bird of Prey. She'll look like this: 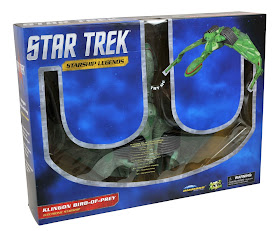 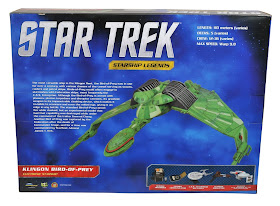 And here is the final model, out of the box too: 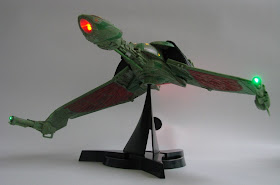 For those of you wondering where the landing gear seen on earlier prototypes of the model has got to, the latest DST Q and A has the answer:


The Trek 3 – HMS in other words, version will have the landing gear, the other version will not. I do not think that has changed since we started developing the item but they have been in work so long I can see where some confusion might come up.

They also made a similar comment on the planned USS Excelsior varient of the forthcoming USS Enterprise-B ship:


YES we are working on the Excelsior (as we have said) and YES it will have all new sculpted parts but YES it will include some of the parts from the B. Frankly, that is the only remotely possible way for us to afford doing both the B and Excelsior. I hope everyone will be happy with both ships when it’s all said and done.

DST also recently posted a shipping date list, which gives us an update on when to expect all the latest Star Trek stuff coming from DST. These are the dates they expect to send them out to retailers, so they should appear some time after:
Also listed are a load of reissues of their TOS Trek tech, in just about every variation and combination imaginable!:
Notably absent from these lists are the dates for the reissues of all the DST starships, and the new Star Trek Select action figures, which were expected early next year. I guess we'll be waiting until after February for those now.