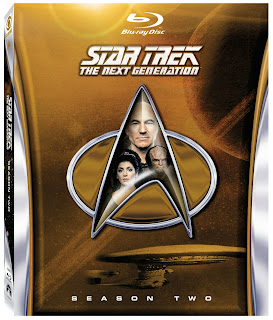 Amazon has added listings for the bluray release of TNG season two, which gives a release date in early December. Exactly when depends on your Amazon, in the US it's down for the 4th, while the UK thinks the 10th, and France expects the 12th.

Trekcore recently reported than in addition to the expected audio commentary for the extended episode The Measure of a Man, they believe the first Borg episode, Q Who?, may also be getting a commentary. As commentaries were about the only thing I felt the season one set let us down on (featuring exactly none) I'm happy to hear such news.

The Amazon listing also includes a higher resolution version of the cover art, which if you look closely you might note has the TNG Starfleet emblem added to the spine, so it will match the re-issued version of season one, which uses the appearance of said emblem to mark it as a corrected version.

UPDATE: TVShows onDVD has posted a press release which confirms the 4th December release date and all the extra features: There are indeed to be two audio commentaries, by Dan Curry, Don Berman and Mike Okud, and by Melinda Snodgrass and Robert Scheerer. There are to be two versions of the extended cut of The Measure of a Man, one in HD and one described as "hybrid" (maybe they could only find SD versions of some scenes?). There will also be the old DVD features, the continuation of the behind the scenes documentary series, the cast reunion feature, and another gag reel. On top of all that another screening event is planned to mark the release, no details on which episodes yet, but it kind of has to be The Measure of a Man, doesn't it? Read the full release, here.