IDW have released their November solicitations, which include four new Star Trek titles. We'll be getting an alternate timeline mirror universe, and two different Borg time travel stories, including what looks and sounds like a TARDIS trip to (Bad) Wolf 359:

Star Trek (ongoing) #15
Written by Mike Johnson, with art by Stephen Molnar, and a cover by Tim Bradstreet.


The countdown to next year's STAR TREK sequel continues here, in an all-new re-imagining of the classic "Mirror Universe" story! Witness the transformation of the new Enterprise crew in part one of this blockbuster story, overseen by STAR TREK writer/producer Roberto Orci! 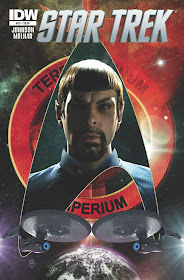 Assimilation2 #7
Written by Scott and David Tipton, with art by J.K. Woodward and Gordon Purcell, and covers by Woodward.


The Doctor and his companions must travel into the past and navigate through one of the Federation's most crushing defeats in order to prevent an even worse fate in the present! 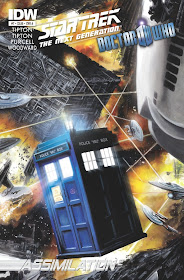 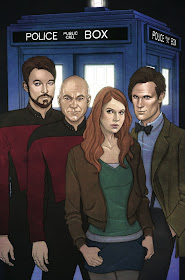 
The Borg story to end all Borg stories warps towards it thrilling conclusion! In the far-flung future the Borg Queen faces off against the Borg King... an ancient Locutus! The stakes have never been so high, as the fate of the Enterprise -- and the entire galaxy -- hang in the balance! 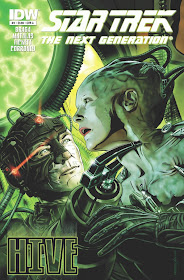 
The countdown to the next STAR TREK movie continues here. In "The Return of the Archons!" Kirk, Spock, and the crewÂ search for a lost Starfleet ship that may hold clues to the future of the entire Federation and in "The Truth About Tribbles!" the crew of the EnterpriseÂ encounters the classic alien species in an ALL-NEW story inspired by the fan-favorite episode. 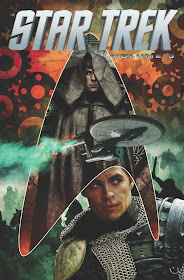