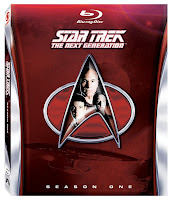 Following on from the US disc replacement scheme, to correct audio problems on the TNG season one bluray set, a UK version has now been put in place. The details of the UK version also tell us how we'll be able to tell between corrected and faulty sets, when new copies with the correct start hitting stores:


We have discovered an anomaly in the English 7.1 DTS Master Audio track in our Star Trek: The Next Generation Season 1 Blu-ray Box set. There are some episodes that inadvertently had their front channel designations incorrectly mapped, resulting in an undesired playback experience when listening to them in a 7.1 or 5.1 Surround Sound environment. In addition, we have taken this opportunity to correct a few minor issues that were found on other episodes.

We are quickly working to remedy the situation by recalling affected product and replacing it. Corrected versions can be identified by the appearance of a red Delta on the spine and will contain barcode no: 5051368241838 for ease of identification. If you purchased the box set prior to the recall, this will be replaced and will be made available free of charge. Please email stng@sonydadc.com for details regarding the replacement program. You may also call 01992 657 739 Monday-Friday between 9:00 a.m. and 5:30 p.m.

We strive to provide our fans the best Blu-ray experience possible and sincerely apologise for this inconvenience. 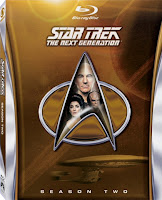 Meanwhile the extended cut of The Measure of a Man, coming to the season two set continued to get more exciting: TrekCore report that the extended cut is now confirmed, and that both it and the original cut will be included. The new cut will also include some new effects shots, and will be getting an audio commentary, from the writer, Melinda Snodgrass,director Robert Scheerer, and Mike Okuda. I am particularly pleased about this, as the one thing I really noticed the absence of on the season one set, was a single audio commentary; hopefully this will be the first of many in future sets.