There's just a week to go until the release of Star Trek: The Next Generation season one on bluray, but I'm sure it's the later seasons we're all itching to see in HD - Fortunately TrekCore have a trailer for season two to give us a taste of what's to come. Bluray Borg anyone?

The trailer also gives us a peak at the lovely golden cover for season 2: 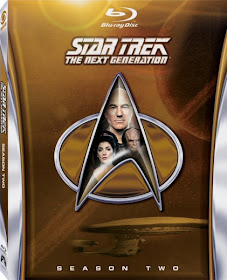 TrekCore also recently reported from the TNG panel at Comic Con, where CBS's Ryan Adams mentioned that they are already considering the possibility of DS9 in HD too. It was apparently the overwhelming interest from fans for TNG in HD that helped push that agenda, and he wants to hear from us if we want DS9 too: "If this is what you want, make it vocal – especially now with social media, Facebook, Twitter, Blogging – you guys let us know what you want next. We want to please the fans and give them what they want.".

So Mr Adams, yes I very very much want DS9 in HD, and Voyager, and Enterprise! Heck you don't even have to convert the last one! Also TAS would be awesome, especially if you made a new TAS episode using the all the original cast voice recordings made for the lamented Secret of Vulcan Fury video game...