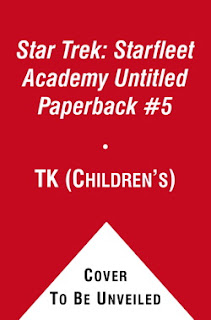 The Simon and Schuster digital catalogue has been updated with a new blurb for the next Starfleet Academy book, due out in August 2013. The book doesn't yet have a title, or even an author listed. Sounds like they're jumping around the timeline a bit, with this blurb suggesting we're back in first year, while the most recent book in the series, The Assassination Game, was in at least the second year.


It has been six months since James Kirk joined the Starfleet Academy. The rebellious young Kirk is used to doing things his way, but the Academy is showing him how to transform his headstrong attitude and ambition into qualities that will make him a leader.

In the fifth installment of the Starfleet Academy series, Kirk and his classmates are faced with conflicts greater than they could ever have imagined…. But if anyone’s equipped to take on a challenge, it’s the students of Starfleet Academy!

A couple of the authors of the 2013 TOS novels have also made comments (on the TrekBBS) on the blurbs for their books posted a few days ago. Tony Daniel had this to say about his book, Devil's Bargain (original blurb follows):


The colonial world is not a mining colony, but a producer of a beer famous in the local sector. The Horta are are recruited to help avoid an asteroid strike that's going to destroy the colony.

Captain James T. Kirk and the crew of the Enterprise are sent to evacuate the Federation mining colony Vesbius, a frontier settlement that is on the brink of an extinction-level event, threatening the lives of all the colonists and the disruption of ore production vital to Starfleet. However, the colonists refuse to abandon this settlement, not wanting to leave their claims. It is after these irrational decisions that Spock suggests that perhaps an unexpected ally could aid the colony and help complete the mission....

Greg Cox (who himself wrote one of the handful of the other books to feature the Horta, Devil in the Sky) simply noted that the blurb for his book, The Weight of Worlds, is:


...based on an old draft of the outline. There is no "Coven" in the actual book.

Kirk, Spock, and Sulu must protect the remote Federation colony of Ephrata from the dreaded Coven—beings from another galaxy who are seeking starships much like the Enterprise to spread from world to world, opening gateways between dimensions to eventually conquer the entire Federation.

Jeff Mariotte also posted the blurb to his book, The Folded World, on his blog. He made no further comment, so presumably it's accurate?