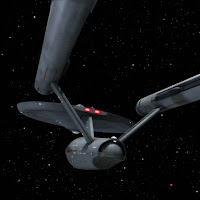 The Simon and Schuster online catalogue has been updated with the first blurbs for the four TOS novels coming in 2013:


After a particularly horrifying experience, Captain James T. Kirk starts down the path toward something he believes he might regret for the rest of his days: accepting a commission as an admiral working at Starfleet Headquarters on Earth, far removed from the mysteries and adventures of deep-space exploration. Knowing that the Enterprise’s five-year mission is coming to an end and not wanting to forever be a wandering soul, Kirk must decide if this promotion is worthy of his true destiny or merely a temporary lapse in judgment....


Captain James T. Kirk and the crew of the Enterprise are sent to evacuate the Federation mining colony Vesbius, a frontier settlement that is on the brink of an extinction-level event, threatening the lives of all the colonists and the disruption of ore production vital to Starfleet. However, the colonists refuse to abandon this settlement, not wanting to leave their claims. It is after these irrational decisions that Spock suggests that perhaps an unexpected ally could aid the colony and help complete the mission....

The Weight of Worlds, by Greg Cox


Kirk, Spock, and Sulu must protect the remote Federation colony of Ephrata from the dreaded Coven—beings from another galaxy who are seeking starships much like the Enterprise to spread from world to world, opening gateways between dimensions to eventually conquer the entire Federation.

The Folded World, by Jeff Mariotte


En route to a diplomatic mission, the Enterprise receives a distress call from the USS McRaven. As the Enterprise approaches the area where the McRaven appears to be, the crew encounters an anomoly unlike anything they’ve ever experienced. Space itself seems inconsistent—warping, changing appearance. But during the brief periods of calm, they locate the McRave—along with other ships of various origins, all tightly surrounding and being held in place by an enormous unidentified vessel....