My Germany correspondent, Unreality SF's Jens Deffner, has been in touch to gives me the latest updates on Cross Cult's translations of Star Trek comics. Or maybe the restarting of such translations, as previous editions hadn't really gone down that well. Coming very soon, in May, will be their first volume from the Star Trek ongoing series, which they are titling Die Neue Zeit I.

Cross Cult have also asked about the Legion of Super-Heroes crossover, but are awaiting a response on doing that one, and are also waiting to see what the Doctor Who crossover is like before they commit to it. They have no interest in Infestation.

Meanwhile Spain is also seeing a minor resurgence, as Likantro has just recently released a Spanish translations of Spock: Reflections (Las Reflexiones de Spock), following on from their previous translations of Countdown and Nero. Interestingly this latest volume apparently has some added content in the form of some sort of Spock biography by Carlos Diaz Maroto and Luis Alboreca, with illustrations by Javier Aranda and Cels Piñol.

Finally back in the English-speaking world Tim Bradstreet has released his latest title-free cover art, this time for the tenth issue of the ongoing series. It has lots of lovely cogs: 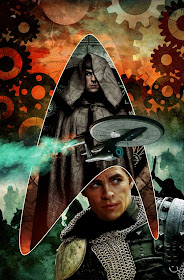