Amazon have posted back cover images up for the 2013 Ships of the Line and TOS calendars. While neither show every image in the calendar, all those seen on the Ships of the Line are, disappointingly, reuses of previously published images: 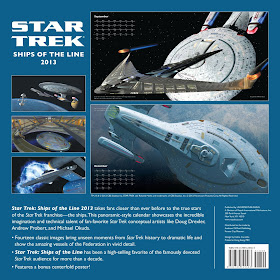 Hopefully this isn't the final version however, as a best-of-reprint-edition is exactly what Doug Drexler said this would not be when he announced the change of publishers.


Now, frankly, when you’re making a transition like that it’s really important how you look when you come out the other side. You can’t look like a retread. So I talked to my buddies who work on the calendar and I said, “Look, they want to do a rerun thing. Personally, I’m not going to do that; I’m going to create new art for the rerun price, and you guys are free to do that as well if you want. I hope you will.” And everyone just jumped in. We actually got the calendar together in about three weeks. I think it’s one of the best-looking calendars yet. So, sometimes extra-cool stuff comes out of adversity. I’m real excited about it.

UPDATE: At the very least, Mark Rademaker has confirmed, on twitter, that he contributed a new image.

UPDATE 2: The calendar's editor has confirmed with me that these are not the final versions.

Here's the TOS one, which obviously always contains familiar images: 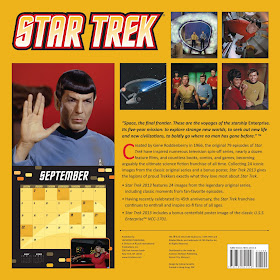