StarTrek.com has announced IDW's Star Trek titles for March, which inlcude the first original story in the onging series, the final issue of Star Trek/Legion of Super-Heroes, and a second "100-Page Spectacular". UPDATE: Solicitation blurbs and more cover details from IDW's full solicitations.

Star Trek (ongoing) #7: The Vendetta Conspiracy, Part One
By Mike Johnson, art by Joe Corroney, cover by Tim Bradstreet, plus Bradstreet sketch-cover and a photo-cover.


The adventures of the new crew of the Enterprise continue in this all new two-part story that takes place soon after the events of the last film! While Vulcans struggle to survive in the wake of their homeworld's destruction at the hands of rogue Romulans, and some Vulcans believe that the logical response can be summed up in one word: revenge! 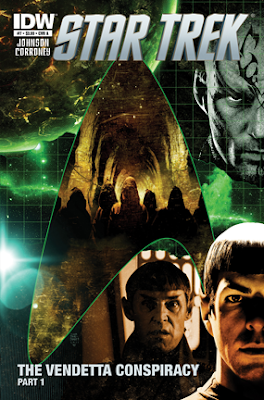 
It's all been building up to this. Captain Kirk, Cosmic Boy, and the rest of the timelost Legionnaires and Starfleet officers have reached the end of the line, and are confronted with the powerful forces which have unwritten their respective histories. But with half of their teams stranded in the past and the other half held prisoner in the future, what chance do they have of overcoming the odds and restoring the worlds they once knew?


The adventures of the Starship Enterprise continue in this new story that picks up where the blockbuster 2009 film left off! Featuring the new cast of the film, these missions re-imagine the stories from the original series in the alternate timeline created by the film, along with new threats and characters never seen before! With creative collaboration from STAR TREK writer/producer Roberto Orci, this new series begins the countdown to the much-anticipated movie sequel premiering in 2012.


Several classic Star Trek  stories offer an exciting-and reasonably priced!-introduction to the exciting universe that is Star Trek. Including the origins of a tragic and heroic captain to a mischievous alien intent on causing mayhem, plus more!