Joe Corroney has posted on his Facebook page his cover art for the forthcoming fourth issue of the Star Trek ongoing series, which continues his series of cool retro recruitment posters: 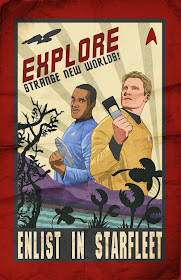 You can see the sketch version of this, featuring Spock and Kirk, here.

Meanwhile this week's release of the third issue of Star Trek/Legion of Super-Heroes also featured a cool variant cover: This one continuing the Gabriel Rodriguez series with one character from each half of the crossover, but with Mario Alberti providing the charter art on top of Rodriguez's background - This time featuring Uhura and Shadow Lass: 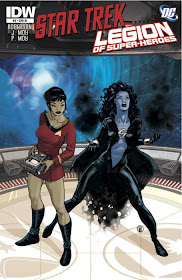