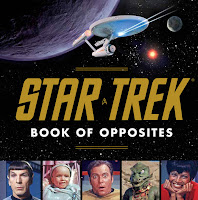 I swear the Star Trek Book of Opposites has been out since September, yet for some reason there's suddenly a lot of release buzz about it, and Amazon now says it was published this month. Said coverage includes an interview with the author, David Borgenicht, on StarTrek.com, where he had this to say:


I started just by looking at the world of opposites and synonyms and antonyms. I made a long list of opposites. Then I did some initial development on the concept, to see how much Star Trek imagery there was out there that I could associate with those words, just to prove the idea. Eventually, when we did the deal with CBS for the license, we worked with great people at the archive, who provided us with access to dozens of different Star Trek images.

I also think Book of Opposites is entertaining and visually arresting enough to work for any kid, whether or not you know the show. Parents who buy it for their kids really may be buying it for themselves, to read and to be read to. If this book had existed when my kids were babies, I absolutely would have bought it and read it to them. My kids are a little too old now for a book of opposites, but they’re not too old to appreciate the show and the humor and the show's place in pop-culture history.

Promoting the book, Borgenicht has also done a nice article for the Huffington Post, where he lists the "7 Life Lessons You Can Learn From 'Star Trek'".

And I'm happy to add to this buzz, because this is such a cute idea for a Trek book (hoping to get my copy for christmas).