Round 2 Models have updated their blog with news of their next Star Trek model kits coming at the end of this year and into next year. They apparently were originally revealed at the recent iHobby show; the images below come from starshipmodeler.com's coverage of that event, or from Round 2's website.

Star of the show was the first public reveal of next year's 1:350 TV-era TOS Enterprise. Even taped together it looks impressive: 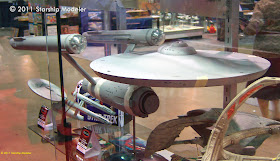 Looking at the end of this year, the previously announced Enterprise-C re-release will be out by December, complete with all the battle-damage decals promised. Something I managed to miss, the Klingon D7 kit was re-released in August in a tin, and will be coming in a plain old cardboard box by Christmas. Both versions are molded in green plastic with chrome parts, and some of the parts have been remade since previous releases for greater accuracy. 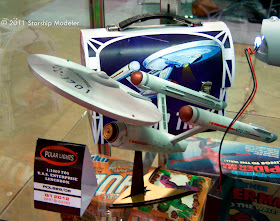 2012 will also see the TNG adversaries set re-released, as two separate sets. One featuring the smaller Klingon Bird-of-Prey and Ferengi Marauder (the latter including glow-in-the-dark parts), while the Romulan Warbird will get a separate release:

By the end of 2012 the Deep Space 9 kit will also be out again, and they're still considering adding something new to that set.

More images can be found on Round 2’s blog, starshipmodeler.com, and culttvman.com.