Out this week from IDW is the Star Trek 100 Page Spectacular, an omnibus of four IDW Star Trek comics bound like a normal comic and sold for the price of a single issue.

IDW's previous solicitation for the issue only identified one issue it would contain, Spock: Reflections #1, and from the creators listed indicted Alien Spotlight: Tribbles would also be a part of it.

Now Comics Continuum have posted a seven-page preview of the book, which also includes the contents page. It seems Spock: Reflections #1 has been dropped in favour of Mission's End #1, while the other three issues are indeed Alien Spotlight: Tribbles, as well as John Byrne's Alien Spotlight: Romulans, plus Captain's Log: Sulu. 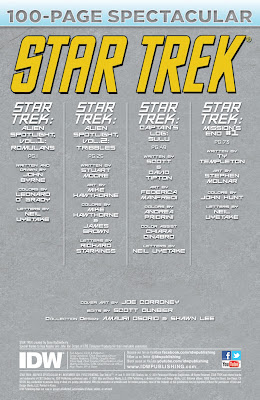