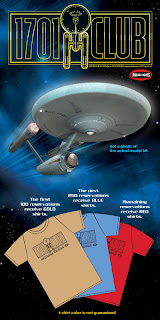 Round 2 Models have announced a new 1:350 scale TOS Enterprise kit, targeting release next year. They will be releasing two versions, plus an extras kit:

For the most dedicated modelling fans you can sign up to the 1701 club and be one of the first to get the kit when it is released, with extra parts to build it to the first and second pilot specifications as well. There will be a run of 1701 of this "Premiere Edition". The parts for the pilot versions may be released separately later, but those who pre-order will also get T-shirts and exclusive emails on the production of the kit.

A standard edition will also be available, and there will be an extra accessory pack as well featuring extra decals, lights, and motors to make the bussard collector fans spin! Full details on Round 2 Models' blog.

Let's hope this one makes it, as it was suggested as far back at 2008 with an estimated 2010 release!