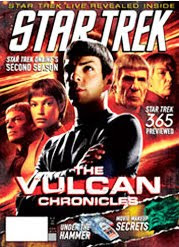 StarTrek.com has posted a preview of the next issue of the Star Trek Magazine, which will include "an interview with Barney Burman, Oscar-winning makeup designer of J.J. Abrams’ Star Trek film; a first-person feature by longtime Star Trek collectibles expert Alec Peters; a preview of Abrams Books’ upcoming coffee table tome Star Trek 365; and looks at both Star Trek: Season Two and Star Trek Live."

StarTrek.com has extracts up from a couple of those articles, have a looksie.
at 11:15