Well here’s an odder bit of Star Trek product news: As reported by Startrek.com, alongside the release of the first Khan: Ruling in Hell issue, in October, IDW will be releasing a plush Khan toy. So you can snuggle up with Khan to read his life story?

UPDATE: TrekMovie has posted an image of the design for this plushie: 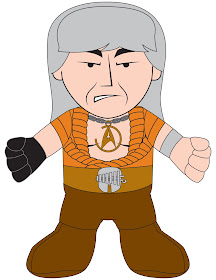 Mondo have announced (and subsequently sold out of) their second Star Trek poster print, this time based on The Trouble with Tribbles: 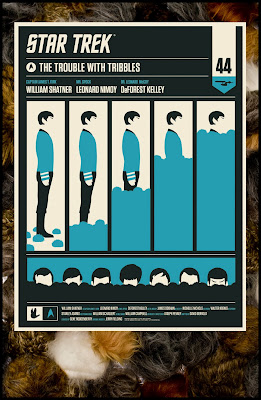 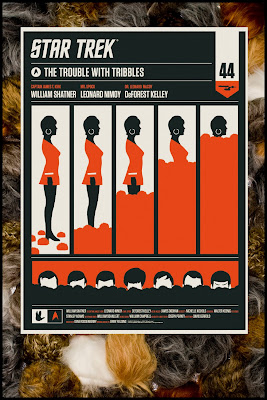 
The story behind the man who replaced Captain Picard! When Captain Edward Jellico took command of the Starship Enterprise in the landmark NEXT GENERATION two-parter "Chain of Command," it took the STAR TREK world by storm! Now, learn the background of one of the most controversial characters in TREK history, as Captain Jellico's new first officer joins the U.S.S. Cairo only to find herself thrust into a conflict with the Cardassians...


When the most infamous villain in STAR TREK history is last seen in the Original Series episode "Space Seed," Khan Noonian Singh's an elegant, proud warrior-king. When he's next seen in STAR TREK II, he's a grizzled maniac, twisted by loss and an unquenchable thirst for revenge. What has happened between these two points in time to so radically alter what seemed to be an unbreakable will?


J.J. Abrams' blockbuster revitalization of the Star Trek franchise was the most thrilling film of 2009. Now, under the direction of Abrams and screenwriters Roberto Orci and Alex Kurtzman, comes the highly anticipated graphic adaptation of the film! Additionally, new scenes and moments cut from the movie are revealed--an event no Star Trek fan can dare miss!


Space, the final frontier... And on that frontier and beyond, humans and aliens alike need medical care. Enter Leonard McCoy, Doctor of Space Medicine, later of the U.S.S. Enterprise! Now delight at John Byrne's tale set in the period before Star Trek: The Motion Picture! Featuring appearances by Captain James T. Kirk, Montgomery Scott, and other familiar faces!

Startrek.com have posted a preview of Hallmark's christmas ornaments for 2011! The designs for next will be: Mr Spock, the second in the Star Trek Legends series; the mind meld scene from Mirror, Mirror, with a sound clip; and a TOS Romulan Bird of Prey with lighting effects. 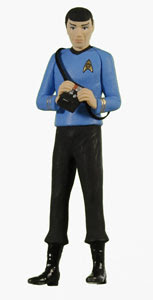 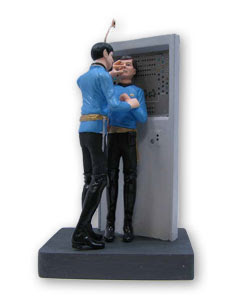 Full details on the sculptures and sizes at Startrek.com.

Startrek.com have posted a four page preview for this week's fifth issue of the movie adaptation comic. Here's one page: 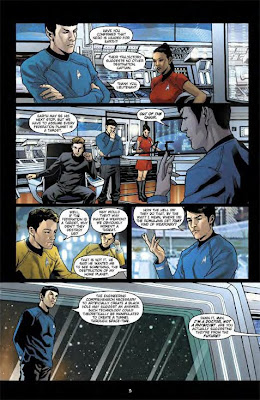 See the rest at Startrek.com

Trekmovie have announced details of new movie replicas coming from QMx. The first releases will be a "stunt" phaser (with no moving parts/lights/etc) and an Academy ring, both metal plated. 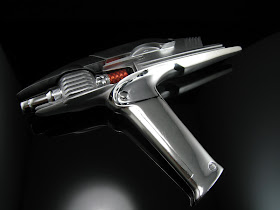 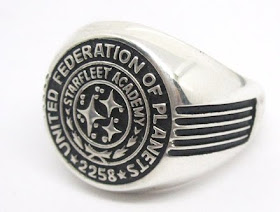 The phaser comes in at $49.95, with a more expensive version with moving parts and lights on the way later. More details on these products at trekmovie.

Between Andrews McMeel Publishing's website and calendarclub.co.uk I bring you the front and back covers of next year's Ships of the Line calendar, which is already starting to appear on sale now! 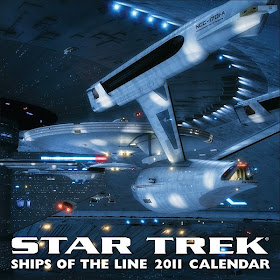 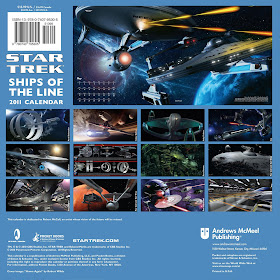 Some interesting stuff in there: two new movie images, two TOS remastered images, two paintings this year! The proto-warbird which has already been previewed and a nice glimpse inside the Enterprise-E's shuttlebay. Two Enterprise images, plus the very exciting technical manual style center fold. And then everything else is TOS in one way or another. Not one image for DS9 or Voyager! (Or Titan again!) Two years in a row for poor old Voyager fans, hopefully they'll be compensated with a Project Full Circle fleet in 2012 *hint hint*!

UPDATE: Trekmovie have posted these pages too, plus a higher res image of the centerfold, good enough to read the text!

TrekMovie have announced the details of IDW's next Trek miniseries, the Tipton Brothers mystery next TOS series is, To Reign in Hell, *ahem* I mean, Khan: Ruling in Hell, a four part series depicting the exile of Khan and his augments on Ceti Alpha V. The series will start in October, with interior art by Fabio Mantovani and covers by Michael Stribling and Joe Corroney. And here are the first issue covers: 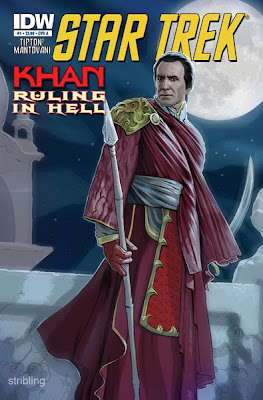 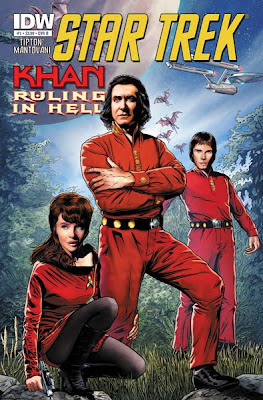 QMx have released a set of four posters using early poster concepts for the new movie. You can get all four for a mere $29.95! 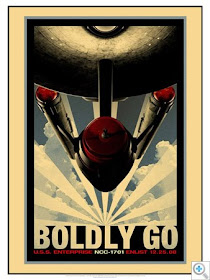 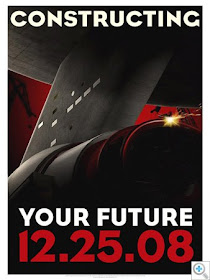 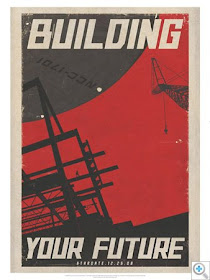 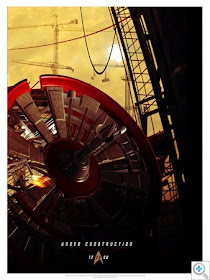 According to an article about the posters on startrek.com there are three more sets of posters in the works too!

Laser etched schematics of some of your favourite ships: 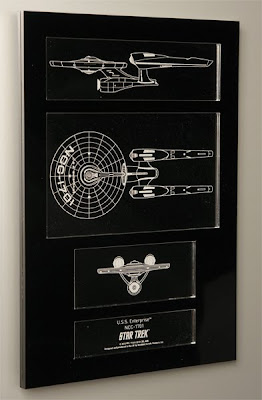 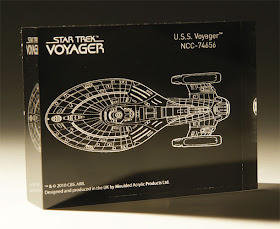 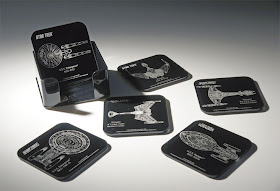 Little pewter ships imprisoned in a block of acrylic: 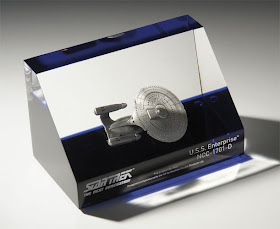 And limited edition pewter ships in oddly shaped blocks of acrylic. Including my favourite, the D7 in a diamond!: 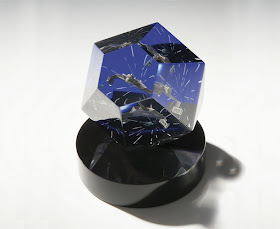 You can check out the full range on Moulded Acrylic Products Limited's website.

The promised new startrek.com has been launched. And it looks a bit like this: 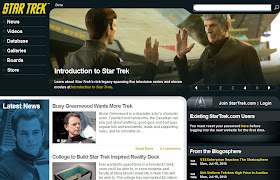 Go check it out, with new features including integration of feeds from Trek fansites, and updates to the database to include info from the new movie.
at 02:50 No comments:

Cryptic have posted further details on the Season Two update to Star Trek Online. Highlights include: New ships for both factions. New Klingon missions featuring a Fek'ihri attempt to take Qo'noS. Federation Diplomatic Corps missions. New Undine missions, including visits to fluidic space. Minigames. And new weekly missions, and a new neutral mission giving race, the Deferi, plus their enemy you can aid them fighting. For full details read the original report. And also check out the new trailer for the season two update:

Cryptic have also launched a new browser game, the Star Trek Online Architect, which lets you (in a somewhat limited way) design your own starship. Linky.

A nice Memory Alpha user has uploaded the Seize the Fire cover recently released in the Star Trek Magazine (still awaiting my copy!): 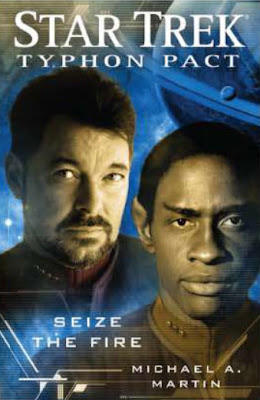 USS Planck on the way 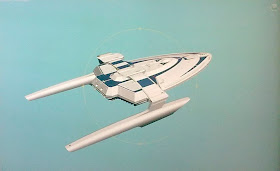 You can see a more behind-the-scenes version in the original post.

This image of some unfriendly looking aliens (the Fek'ihri maybe?), has been released recently too: 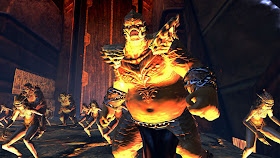 Ask Cryptic explores a few other questions too, check it out here.

I have just launched a new blog, the 8of5 Archive. My aim with this blog is to make a backup of elements from Trek websites so that the information they contain is not lost if or when the site is redesigned or taken down. And to do so in one easy to find place.

I've started with an archive page for the Intel To Boldy Go website, a tie-in for the new movie which gave specs for the Kelvin, and has already been lost. Between my own notes and a TrekMovie article I've been able to reconstruct most of the key content, though do have one or two gaps if anyone has records of the missing data.

Future archives will include Star Trek Online's Ships of the Line feature, which has also been taken down already in favour of a simpler ship listing, and the dossiers from the Star Trek movie website, which are for now still present. I'm also thinking about keeping a record of press releases and print advertisements there, but I want to get its primary function more developed before expanding, and know the latter of those two possibilities is already covered to some extent by the excellent My Star Trek Scrapbook blog.

Amazon has added a listing for a third book in the new Starfleet Academy series, this one is due out in April 2011, and it by Rudy Josephs again. Like the first two it is available in both hardcover

The Star Trek Online C-Store has been updated with a few new items, including:

The "Federation Dreadnought Cruiser", as they're calling the Galaxy-X class, aka the All Good Things... version of the Galaxy class: 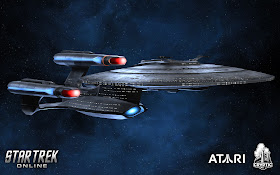 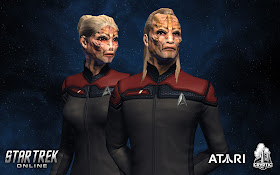 And a Klingon version of the Borg character: 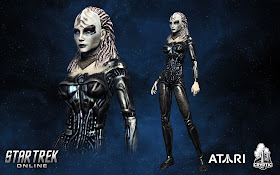