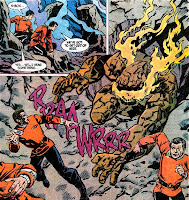 TrekWeb have launched a campaign to push CBS/Paramount to start work on a special edition of Star Trek V: The Final Frontier, to redo the effects and restore scenes removed due to failures in effects.

As this is something I've wanted to see for a while I wholly support the campaign and encourage you dear readers to make your voices heard. TrekWeb's report details the changes they think need to be made. But in short, write to and phone CBS, make your voice heard; that we need The Final Frontier to get the treatment it deserves. I watched the film not long ago and found it far better than I expected; of all it's flaws the effects are certainly the biggest issue, and that's something that can be fixed!

And while you're at it ask them to get on and release the Director's Edition of The Motion Picture on bluray. The theatrical cut just wont do!

UPDATE: There's now a facebook group for it too.

(Image of the rock monster (something cut from The Final Frontier) from DC Comics’ adaptation of the movie.)
at 07:29