Comics Contimuum have released an interview with the Scott Tipton discussing his and his brother's new TOS series Burden of Knowledge. The article describes the first issue thusly: "Captain James T. Kirk, Spock and Doctor McCoy travel to Mygdalus, where a highly-advanced civilization have forged an apparent utopia of perfected nature, miraculous medical technology and benign rule. The Mydalians' petitions for Federation membership, however, have stalled due to some jealously guarded secrets, hidden truths that could sabotage the Enterprise crew's mission."

Tipton summarised the series: "Our intention with this series was to return to the classic feel of the original 1960s series, to tell a series of exciting, thought-provoking adventures of Captain Kirk and his crew that also happen to tackle some current issues of the day, but in a fun and subtle way. Essentially, in our minds, this was a new season of 'Classic Trek,' just maybe with a slightly bigger special-effects budget." He also noted how the four issue series features four separate stories building an overall story arc. Here's a new preview page included with the article (za-chow, za-chow, ka-boom!): 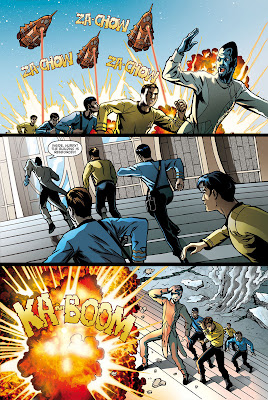 The interview also discusses how the Tiptons approach the different versions of Trek they've worked on.