Simon and Schuster have updated their online catalogues with loads of new Trek blurbs:

Typhon Pact: Zero Sum Game
A spy for the Typhon Pact—a new political rival of the Federation—steals the plans for Starfleet’s newest technological advance: the slipstream drive. To stop the Typhon Pact from unlocking its secrets, Starfleet Intelligence recruits a pair of genetically enhanced agents: Dr. Julian Bashir and Sarina Douglas­—for whom Bashir has long harbored passionate feelings. The two must infiltrate a world controlled by the mysterious species known as the Breen, find the hidden slipstream project, and destroy it. Meanwhile, light-years away, Captain Ezri Dax and her crew on the U.S.S. Aventine play a dangerous game of cat-and-mouse with a Typhon Pact fleet that stands between them and the safe retrieval of Bashir and Douglas from hostile territory.

Typhon Pact: Seize the Fire
Shortly after making the stunning revelation that it has joined with Federation’s newest adversary—a coalition of galactic powers known as the Typhon Pact—the Gorn Hegemony suffers an ecological disaster. Fortunately, the Gorn had already been investigating traces of an ancient but powerful “quick terraforming” technology left behind by a long-vanished race — a dead civilization that may be responsible for habitability of many of the worlds on the Gorn frontier and beyond. When the U.S.S. Titan begins pursuing this potent technology as well, in the hopes of using it to heal the many grievous wounds sustained by the Federation, it is unclear how dangerous such planet-altering technology can be, even when used with the best of intentions….

Typhon Pact: Rough Beasts of Empire
The Romulans have a divided empire, with the original Romulan Star Empire joining the Typhon Pact and the nascent Imperial Romulan State establishing relations with the Federation. Numerous factions within the two Romulan governments vie for power and undivided leadership, and Machiavellian plots unfold as forces within and without the empires play political games. Spock, still on Romulus in pursuit of his goal of reunifying the Vulcans and Romulans, finds himself in the middle of these political battles.

Meanwhile, Benjamin Sisko returns to life in Starfleet, a lonely, fractured man now divided from his family, a set of circumstances brought about by his fears of what the Bajoran Prophets forecast for him and their recent abandonment of him. Kira Nerys has left Deep Space 9 and the Bajoran Militia to follow a religious path on her homeworld. Elias Vaughn suffers a debilitating injury during the Borg attack that leaves him comatose, with no prospects for a return to health. Finally, the Tzenkethi are introduced as an anti-democratic species, who genuinely believe it foolhardy to trust to the will of the masses when individuals clearly have strengths that suggest where they would best serve the people. Given those beliefs, the Tzenkethi also involve themselves surreptitiously in the struggle for power amongst the Romulans.

Myriad Universes: Shattered Light
What began as the exploration of one Star Trek parallel universe explodes with the introduction of six new alternate realities.

Set across history, touching upon every series, and written by a variety of Star Trek authors, each story in Myriad Universes: Shattered Light presents a unique alternate vision of the Star Trek universe, taking pivotal moments from its history and extrapolating the shocking changes that follow those deviations.

In these divergent realms, known history is bent, like white light through a prism—broken into a boundless spectrum of what-might-have-beens. But in those myriad universes, what might have been…is actually what happened.

Following the dramatic events seen in the previous novels, After the Fall, Missing in Action, and Treason, Captain Mackenzie Calhoun and the crew of the U.S.S. Excalibur now face an uncertain future, as their lives and the very fate of Sector 221-G are thrown into utter chaos. With a storyline concurrent with The Next Generation, and picking up at a point where there have been significant changes, new and old readers alike will be captivated by this series.

And there is also this revised cover for Nightshade (can't quite make out who the author is...): 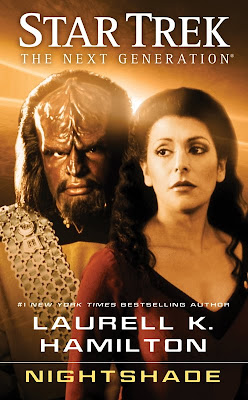 Finally, David Mack has announced on the TrekBBS that he has just signed the contract to write his next Mirror Universe novel: Rise Like Lions.