John Byrne has announced on his forums that he has just had THREE new Star Trek comic series green-lit by IDW! All three are set before TOS-proper. One will be the long awaited Assignment Earth second series, which will preceded by the other two; one of which will conclude at about the time Robert April takes command of the Enterprise.

Byrne has also posted a page from issue three of his soon to start Frontier Doctor series: 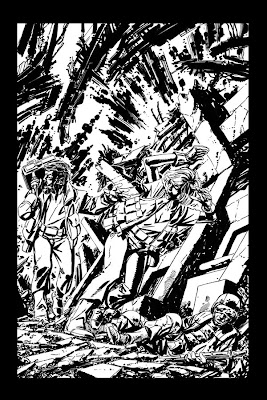 He also commented on that issue and beyond: "...the third and fourth issues of FRONTIER DOCTOR we will be visiting a pre-refit Constitution class starpship that will show some of the modifications made to those old warhorses prior to their getting chopped and channeled. So the Bridge, for instance, will be familiar, and yet different -- much in the same way Pike's Bridge is like Kirk's, and yet not."
at 06:47