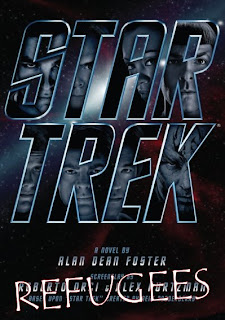 Sequel novel that is: According to Alan Dean Foster's website and a Wired magazine blog report he is waiting for an outline to be approved for a sequel novel titled "Star Trek: Refugees" which is due in October if it's oked (due as a manuscript for later publishing, or as a trade paperback release then?).

Title just screams Spock prime and his stoic band of Vulcan survivors to me, exciting.

The article also discusses writing the recent novelization. All credit to Steve Roby (of the Complete Starfleet Library) who pointed this out on the TrekBBS.

UPDATE: According to TrekMovie the title is one of those Pocket Books will be announcing next week (so presumably has now been approved).
at 19:35